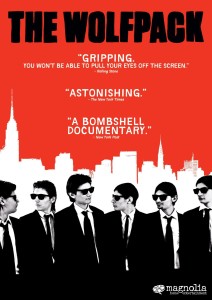 “The Wolfpack” (2015, Magnolia Home Entertainment) The story of the Angulo brothers, a septet of siblings virtually imprisoned in a New York apartment by a delusional father, and who found solace in watching and then meticulously recreating Hollywood action films, reads like a perverse 21st century fairy tale, in which the movies replace magic as redemption for lost boys. But what happened to the Angulos, is real, as is how they transcended their bizarre existence through a combination of nuclear-strength fandom and quiet yet indomitable determination. Director Crystal Moselle’s documentary leaves a few questions unanswered – like the fate of the boys’ mother or sister, and the lasting, psychological impact of their virtual imprisonment – but the end result is a bittersweet and affecting tribute to creativity as a conduit to personal freedom. 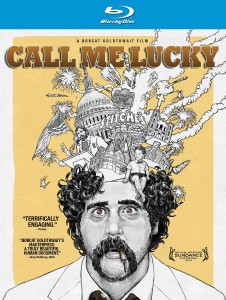 “Call Me Lucky” (2015, MPI) Like “The Wolfpack,” the documentary “Call Me Lucky” is a story of survival after childhood abuse, but director Bobcat Goldthwait extends his scope to explore how such events can stir a person to help others. His subject, Barry Crimmins, was a powerhouse on the Boston comedy scene in the 1980s, a ferocious critic of conservative politics as well as a mentor for comics like Steven Wright, Marc Maron and Goldthwait himself. What few, if any, knew was that Crimmins had also endured horrific sexual abuse as a child; after revealing these incidents during a stand-up performance in the 1990s, he took up arms against the spread of child pornography on the internet. Crimmins’ enormous capacity to care for others by speaking frankly about his own experience and acting upon it, is detailed by Goldthwait with exceptional care and understandable admiration. 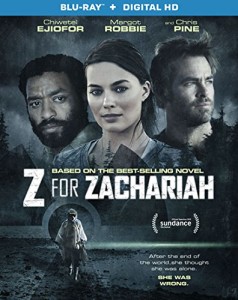 “Z for Zachariah” (2015, Lionsgate) Complicated and contemplative post-apocalyptic drama about a young woman (Margot Robbie of “The Wolf of Wall Street”) whose solitary existence on a remote West Virginia farm is interrupted by the arrival of two men: scientist Chiwetel Eijiofor, who is eager to rebuild civilization, and coal miner Chris Pine, whose ambitions are less clear-cut, and lead to an inevitable conflict. Director Craig (“Compliance”) Zobel takes care to craft his central triangle (an element seemingly borrowed from 1959’s “The World, The Flesh and the Devil” and missing from the source novel by Robert C. O’Brien/Robert Conly), which is well executed by the three leads and manages to touch on a host of social issues without hammering the audience with an intended message. Those who recall quieter, tone poem takes on the end of the world like “Glen or Randa” or “The Quiet Earth” will probably be the film’s most appreciative viewers; others may find their patience tried by the ambiguous ending and occasional glacial pace. 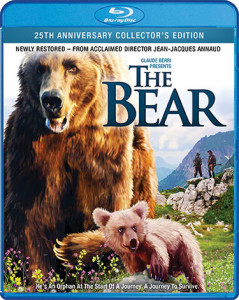 “The Bear” (1988, Shout Factory) Remarkable nature drama from Jean-Jacques Annaud about an orphaned grizzly cub that forges a familial relationship with an older bear (played by Bart the Bear) while both evade a pair of hunters on their trail. Told without heavy sentiment or anthropomorphic motivation – the bears experience growth, maturity and death not as people might, but as it happens in nature – Annaud’s great achievement with “The Bear” is creating an involving story using real animals (with occasional animatronic doubles). The result is frequently beautiful and moving, though parents of very young children should understand that the scenes involving violence against animals do not pull punches, and will probably incur questions about the morality of hunting (which might be the film’s other accomplishment). The making-of documentary that accompanies Shout Factory’s 25th anniversary Blu-ray (technically, the movie is 27 years old, but let’s not quibble) details the technical challenges faced by Annaud, his crew and his ursine cast. 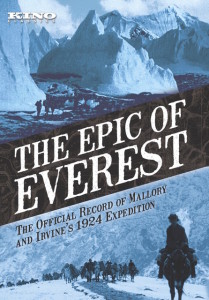 “The Epic of Everest” (1924, Kino Lorber) John Noel’s silent documentary, about a British team’s attempt to scale Mount Everest in 1924, is a visually stunning achievement, detailing both the exceptional beauty and tremendous danger in climbing such a massive location; the latter is underscored by what is most likely the last glimpse of climbers George Mallory and Andrew Irvine, who disappeared near the summit during this attempt (Mallory’s body was not recovered until 1999, while Irvine’s remains are still unfound). The pallor cast by their deaths does not dispel the power of Noel’s images; instead, it underscores the extraordinary challenge faced by these men – whose expedition lacked any of the modern conveniences that climbers employ today – and the unearthly quality of Everest that continues to inspire expeditions to this day. Kino’s Blu-ray looks gorgeous and offers some of the extras featured on the British Film Institute’s region-free release from 2014, including interviews with Noel’s daughter, composer Simon Fisher Turner (who recorded a new score for the film), and members of the BFI’s National Archive and restoration team. 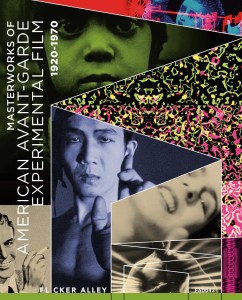 “Masterworks of American Avant-Garde Experimental Film 1920-1970” (2015, Flicker Alley) The roots of the modern experimental film and post-‘70s Hollywood style – as well as their cross-over points – are examined in detail by this overview of American non-narrative art and underground film from pre-World War II to the end of the 1960s. Landmark efforts like Maya Deren’s haunting “Meshes in the Afternoon,” the glorious Dadaist riot of Ferdinand Leger and Dudley Murphy’s “Ballet Mechanique” (with camerawork by Man Ray and score by George Antheil), and Kenneth Anger’s gorgeous fusion of music and image in “Eaux d’Artifice,” are all included, along with works by major figures like Jonas Mekas, Marcel Duchamp (as Rrose Selavy, again with assist from Man Ray), Robert Florey, James Broughton and Oskar Fischinger. The 36 films presented here showcase an axis in the history of film, where past art forms expand the medium’s lexicon, which in turn inform the present through music videos, documentary, experimental technique in Hollywood features, and more. Flicker Alley’s four-disc Blu-ray/DVD set includes detailed and scholarly liner notes, as well as a 2K restoration of Charles Sheeler and Paul Strand’s “Manhatta” (1920-1921), which examines the relationship between architecture and organics in New York City, and Phil Solomon’s “Seasons…”, which re-photographs and edits hand-scratched and painted film loops by the pioneering Stan Brakhage.

Paul Gaita lives in Sherman Oaks, California with his lovely wife and daughter. He has written for The Los Angeles Times, LA Weekly, Variety and The Fix, among many other publications, and was a home video reviewer for Amazon.com from 1998 to 2014. He has interviewed countless entertainment figures from both the A and Z lists, but his favorites remain Elmore Leonard, Ray Bradbury and George Newall, who created both Schoolhouse Rock and the Hai Karate aftershave commercials. He once shared a Thanksgiving dinner with celebrity astrologer Joyce Jillson, and regrettably, still owes the late character actor Charles Napier a dollar.
View all posts by Paul Gaita →
This entry was posted in Movies and tagged Flicker Alley, Kino Lorber, Lionsgate, Magnolia Home Entertainment, MPI, shout factory. Bookmark the permalink.

One Response to Movies Till Dawn: Programmer’s Notes – New and Notable