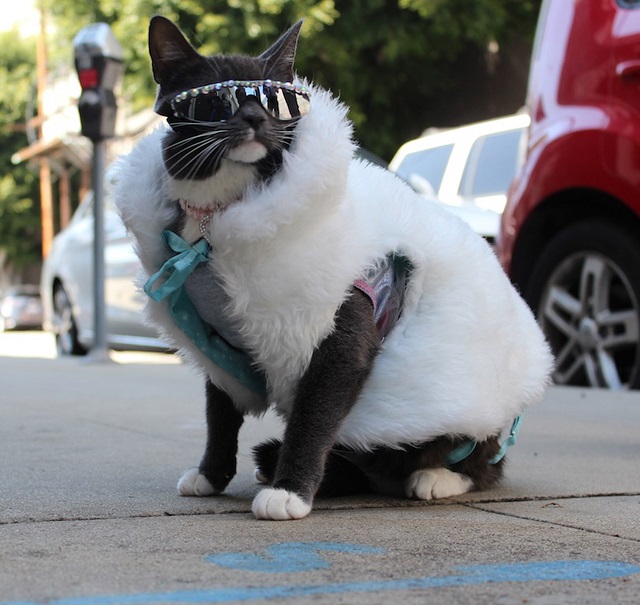 As a cat parent, have you ever waxed resentful of dog owners and how they just so catvalierly bring their canines out to coffee houses in conjunction with their friend, friends or an additional man’s best friend or two wherever they go? Swiftly after musing upon such a paradigm, as a relatively sane citizen rather than a crazy cat lady, you can only remind yourself that cats-straining against undesired leashes or not- would render any human establishment animalistically Armageddonish the likes of which would put any trashed out rock n’ roll musician’s hotel room to shame!

All the same, and in light of said aforementioned musings, Catfe may be the balance and answer for which we have all been searching! Due to unsparing celebrity support by way of Catfe’s current crowdfunding campaign, Catfe LA is well on its way!

Yes envy not, as Carlos Wong, along with film producer Suren M. Seron, further pairing with Best Friends Animal Society are in the process of essential fundraising in order to finally have an answer to the above, in what will, in their opinion be “the nation’s best and most well-developed cat café concept rivaling those in Asia that will combine LA and Tokyo trend-setting cultures with the comfort and enjoyment of cats and coffee.” 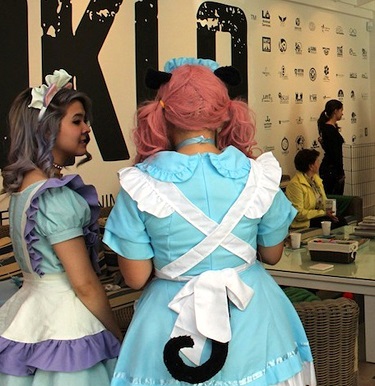 Described as a “cat and coffee wonderland,” Catfe’s mission: To salvage as many stray kitties as possible along with providing the enjoyable experience of imbibing a caffeinated beverage or two so as to assist in the decision-making process, to speak nothing of gustatory satiation.  Cat adoptions are obtainable through Best Friends Animal Society and/or other national shelter partners. Somewhat resembling a Disneyland of Cat Adoption, or quite possibly one of Maria Von Trapp’s most feelgood grooves, (featuring girls in blue dresses with white satin sashes) this half café, half cat rescue is sure to leave you giddily catffienated! Ha haha!  Get it?  Get it?  Catfelineated!!! Or at the very least leaving paw in jittery, over stimulated hand with your new friend of choice!

CATFE’s latest crowdfunding video is a force to be reckoned with as celebrity appearances abound not the least of which encompass: Sunglass Cat and Albert Baby Cat (stars of Animal Planet’s America’s Next Cat Star) Richard Kitty and Sir Sorbet along with some gorgeous models clad in Japanese maid café attire! 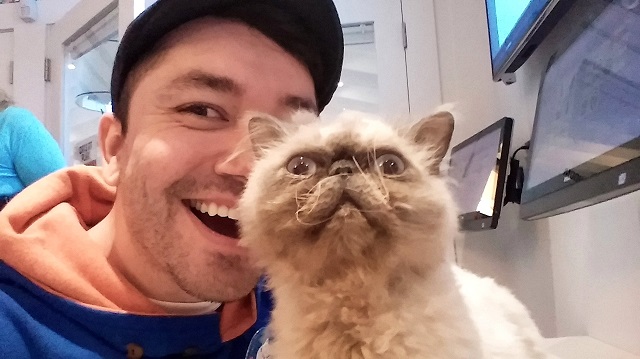 Coffee and Cat adoptions have gone quite well in the past as LA’s last café pop up event, put together by CATFE LA, was a rousing success wherein thousands of attendees adopted dozens of cats in a matter of days. At the moment, even as we speak—or uh…purr and meow if you will–cat cafes are a tradition increasingly trending across the earth!

Yes oh yes! You heard it here first folks! Cat Cafes are fomenting global domination!—But no. No, not in the manner of the assumed evil hairless cat of Austin Powers’ Doctor Evil fame or any given fluffy white-haired, felon-owned freakish feline of James Bond allure, but via the altruistic efforts and endearing essentials pertaining to the needs of kitties and great works of humane humans the world over! Said trend that has been slowly and stealthily sweeping the globe in with the most…well catlike precision, originated in Tokyo, Osaka, and Taiwan wherein people partake of it every day.  In Tokyo alone there are over 40 cat cafes!  And it’s not just limited to coffee hauses, the very first Japanese restaurants catering unto the companionship of kiddahs opened in 2004.  The scene?  A regular work-a-day restaurant encompassing a wondrous room all its own filled with affectionate felines for the fostering!  In 2013 Paris opened its own Cat Café, (only in French they would probably be called something like…Café des Chats) and London in 2014 where it would probably be called the same thing as we call it here. All this in prelude to its enjoyed success in the good ol’ U.S. of A. where CATFE aspires to be the chief advoCAT (see what I did there?) for U.S. expansion! 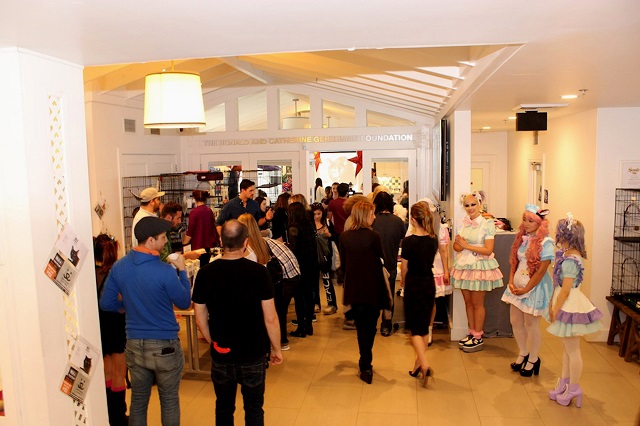 While Cat Stevens will most likely not be making an appearance, nor will Lisa Kudrow be singing “Smelly Cat”—at least not at most such establishments, who really cares…? Nobody needs music when you’ve got cats combined with coffee!

Jennifer K. Hugus was born at a very young age. At an even earlier age, she just knew she would one day write for the LA Beat! Having grown up in Massachusetts, France, and Denmark, she is a noted fan of Asian Cuisine. She studied ballet at the Royal Danish Ballet Theatre and acting at U.S.C. in their prestigious BFA drama program. She also makes her own jewelry out of paints and canvas when she isn’t working on writing absurdist plays and comparatively mainstream screenplays. Jennifer would like to be a KID when she grows up!
View all posts by Jennifer K. Hugus →
This entry was posted in Events and tagged Cat Adoptions, Catfe LA, cats. Bookmark the permalink.