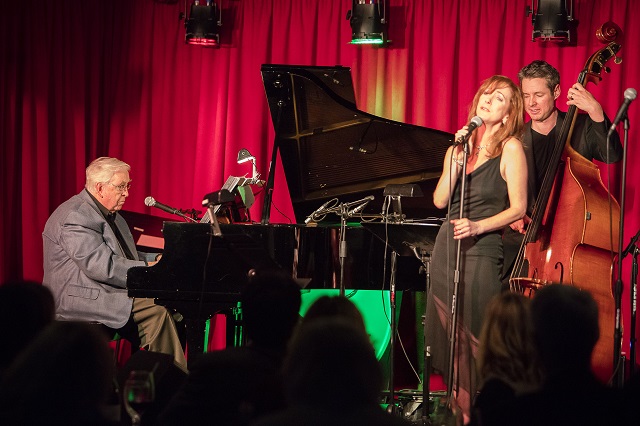 It was a night of song, celebration, and proverbial time travel on the evening of January 10th as father daughter duo Bill and Laura Pursell took the stage at Studio City’s swanky Vitello’s restaurant and nightclub all the while taking us back to the swing era and beyond!  Festooned with rich red show curtains, the stage-clad scenery and a three piece orchestra thrilled to the audience’s every whim as Ms. Pursell herself played consummate hostess/emcee and lounge singer alike!

“I don’t have a list of the order…” she informed us, but not before attempting to hammer things out with her dad in a most funny familial fashion, later adding, “He’s 89 everybody. See?  This is what 89 looks like,” to thunderous applause!

She commenced the set with one of their signature songs, Last Dancehall Left in L.A. and would croon it in an rousing encore upon audience members’ (including yours truly’s) special request due to its soothing singularity.  A number I could swear I’ve heard before, it just had that certain, somewhat sultry, American songbook quality centering around a celebrated but now long sealed up dance hall in Culver City.

Other scintillating standards would include: I can’t help it if I’m still in Love with You, I’ll be Seeing You (In all the Old Familiar Places)—otherwise known as ‘The Goodbye Song’ as termed by Ms. Pursell about which she further confessed, “I never sang this song before and we didn’t know what to do with it, [but we] put an incredible string arrangement behind it.”  And darned if a full orchestra of unmistakable cellos and violins didn’t sound out the keyboardist’s fingertips!– Route 66, The Lady is a Tramp, and Almost like Being in Love (a duet with Donny Most) to name a few…

The three piece orchestra was just top notch and performs with Ms. Pursell every Thursday night at Mixology 101 at The Grove. Upon Ms. Pursell’s disclosure that the keyboardist played with Barry Manilow, the child-of-the-70s in me couldn’t help but geek out over it for a split second!

To top off the former, the bassist looked just a trifle bit like Tom Cruise, particularly when smiling; (well Tom Cruise and the lead singer from Better than Ezra if you took into consideration his lighter brown, slightly wavy hair.)  But once called to my attention by my date for the evening, I simply could not unsee the apt comparison!  Moreover, said resemblance and the erstwhile reference to the keyboardist’s dealings with Mr. Manilow, merely enhanced the cross generational texture and intrigue of the night as an added bonus! 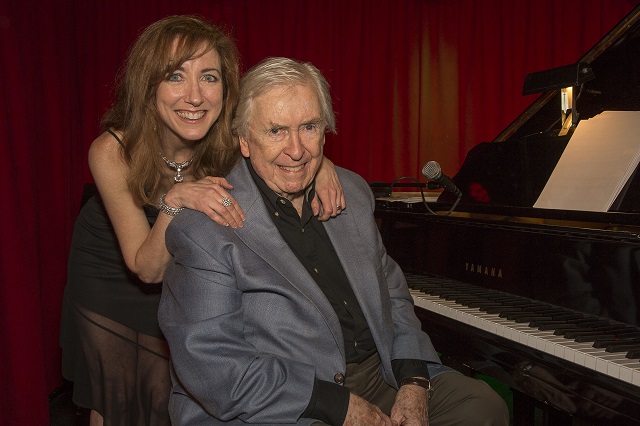 In keeping with the above:

“Karen Carpenter is my favorite singer… I still figure skate to Karen Carptenter,” A multi-talented Laura Pursell admitted before gracefully sliding right into the opening chords of “Love look at the two of us; strangers in many ways…” aka The Carpenters’ For all we Know.

Moving even further along…

Pursell would eventually introduce Donny (Don) Most (aka Ralph Malph from the hit 70’s sitcom Happy Days) as “my new best friend,” thusly making best friends with the audience in kind as his smile was positively infectious and his sound, breathtakingly swing-style authentic–on this night in particular! The mood would only escalate in giddiness from there as the two produced a buoyant duet in the form of You Can’t Take that Away from Me!:  One of my most favorite and exultant swing songs on par with Neil Sedaka’s Laughter in the Rain and 10cc’s (of the 70s) The Things We do For Love! 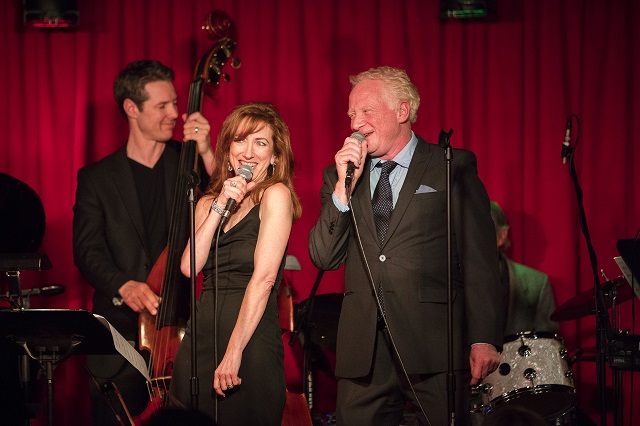 Thereafter we were all reminded that Donny Most has been singing since the age of 14 starting where much of it started, in the Catskill Mountains in upstate New York—and it truly shows!

“I want to do something Bobby did and I loved,” Most would continue (post-duet) all the while referring to his prime idol Bobby Darin as he swung right into to a buoyant rendition of Up a Lazy River after which Ms. Pursell would admit, “I don’t want to follow that! I love his energy!”

But follow she would for the remainder of an evening just as sophisticated and smiling as ever, even turning around at certain points to conduct her three piece orchestra of men in most graceful and refined fashion! “Let’s bring it down a little bit. I want it funkier” she would eventually tell her orchestra before going straight into Peel me a Grape .

The crowd, to speak nothing of their sentiment was just as luminous as the presences and performances onstage:

“Ray Clausen my uncle and a producer is in the audience!” disclosed Pursell

“Tony Russell who works on AT & T Broadband commercials is here,” exclaimed Pursell. “Though he knows nothing of AT&T Broadband, I do all his facebook posts!” 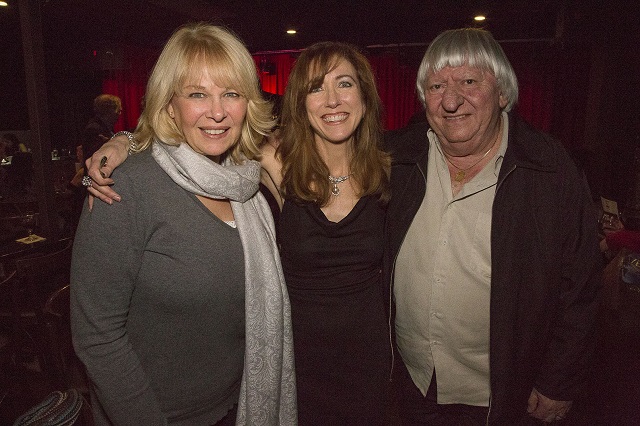 Others in the crowd included: Kate Linder “from dance class” (the multi-faceted Pursell’s dance class that is) but otherwise known to most of the rest of us as Esther Valentine on The Young and the Restless., Dee Wallace best known for her harrowing and sprightly portrayal of Elliott’s and eventually E.T.’s “mom” in E.T., Chris Trousdale best known as Austin & Ally’s Rupert, Carolyn Hennesey aka Diane Miller on General Hospital and lest we forget, Barb of Cougar Town, the multi-talented, congruently musical, Ilene Graff most widely known as Marsha Owens of Mr. Belvedere fame, Ro Brooks of The Haves and Have Nots, Lynnie Garrett, from Hidden L.A., noted Los Angeles Guitarist Adrian Galysh, Jazz guitarist Barry Zweig whom Pursell would refer to as “my guitar player” and last but not least Sharon Carz, “my figure skating coach” Pursell proudly declared!

“I’ve known Laura for a long time,” admitted a proud Kate Linder. “I’m a tap dancer and we met in a jazz [dance] class but she actually performed at a party for my parents for their sixtieth wedding anniversary so of course I will support her in anything she does.  She is an amazing talent and it’s so special that she’s here.  Her father is performing as well and playing for her at 89!”

“He’s a legend,” exclaimed Dee Wallace of Bill Pursell. “I just thought it was so beautiful to be able to experience watching them perform together… But man isn’t he amazing up there? This is our favorite kind of music.  And she’s very down to earth.  We’re really, really enjoying  this…” 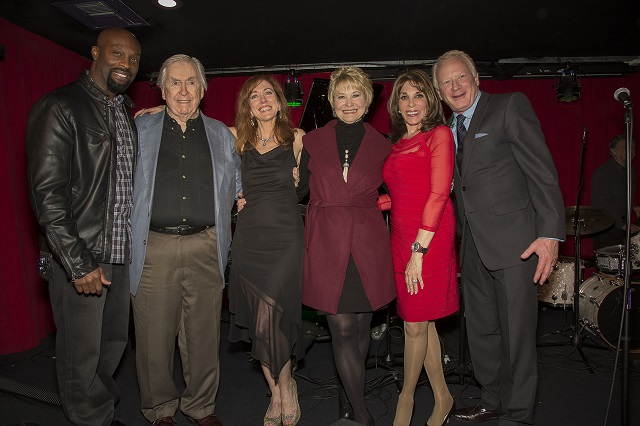 “Laura Pursell is just wonderful,” proclaimed an enthusiastic Ilene Graff. “And my favorite part about this show is her relationship with her dad.  They have such musical respect for each other and such enormous affection and it’s just so much fun to watch their interaction…  It’s such a wonderful up and buoyant evening!”

CDs were readily available just outside the entrance for $15 each. And at a certain point in the evening, it was admitted that particular tunes of theirs were remastered on Austin Powers: “Music to Shag By”.

“I think we should go on the road Dad!” Pursell would later exclaim with a flourish—and righteously so!

For more information regarding upcoming Vitello’s Acts, including Donny Most on February 17th, please visit:

For more information on Ms. Pursell herself, please visit:

Jennifer K. Hugus was born at a very young age. At an even earlier age, she just knew she would one day write for the LA Beat! Having grown up in Massachusetts, France, and Denmark, she is a noted fan of Asian Cuisine. She studied ballet at the Royal Danish Ballet Theatre and acting at U.S.C. in their prestigious BFA drama program. She also makes her own jewelry out of paints and canvas when she isn’t working on writing absurdist plays and comparatively mainstream screenplays. Jennifer would like to be a KID when she grows up!
View all posts by Jennifer K. Hugus →
This entry was posted in Music and tagged Bill Pursell, Donny Most, Laura Pursell, Lounge Singer, Swing Music, vitellos. Bookmark the permalink.