Attorneys for Led Zeppelin were supposed to have battled this case out in a courtroom in downtown Los Angeles this week, but the case has been given a continuance. What is at stake here is the reputation of one of the biggest names in rock music. Led Zeppelin are being sued for allegedly stealing the opening chords of Stairway to Heaven from the lesser-known band Spirit, whose song Taurus bears an audible similarity to Stairway. This is not the first time Led Zeppelin have found themselves on the bad side of a lawsuit charging them with plagiarism.

In the annals of rock music, no other band has had more accusations of plagiarism leveled at them. It started in 1972 with Willie Dixon, and has continued on down the line with Dazed and Confused, The Lemon Song, and now the biggest staple in radio history, Stairway to Heaven. This is not to take away from the talent of the band; they were a monster act in their day, but this lawsuit is not about talent; it’s about giving credit where credit is due. Or is it? Let’s examine some of the arguments being made.

The defendants (Led Zeppelin) claim to have never heard the song.

Under “factual background” Part B, is the interaction between Led Zeppelin and Spirit. Led Zeppelin claim that they never “toured with, shared a stage with, or listened to any of Spirit’s music” during “brief encounters”. These brief encounters were The Denver Festival in 1968, The Atlanta International Pop Festival in 1969, and The Seattle Pop Festival in 1969. Nobody from the Spirit camp can seem to remember whether they even played the song Taurus during these shows, yet Page and Plant can seemingly recall that it was never played. I don’t know how anyone can remember something not being played that they say they never heard of until two years ago. Both sides are lucky that the Internet didn’t exist back then.

Isn’t there something called an antecedent or a prior?

If this case were being decided based on whether or not Led Zeppelin have ever had a prior conviction for copyright infringement, it would be an open and shut case wouldn’t it? Here’s a list of songs in question, taken from page four of the suit filed by Francis Malofiy. Let’s face it, Led Zepplin is the most sued band in the history of rock music.  Malofiy has even called them “the greatest cover band in history”.  The below chart is not all-inclusive, it’s missing a few songs such as “The Crunge” which is clearly lifted from “Get On Up” by James Brown.  The list of songs is endless, but is it plagiarism or it is a simple matter of “being inspired by”?  There are hundreds if not thousands of songs in the vernacular of popular music that sound like other songs and the courts aren’t filled with lawsuits on them.  Rap and Hiphop constantly borrow (read:sample)  from other songs and that seems to go without notice most of the time. 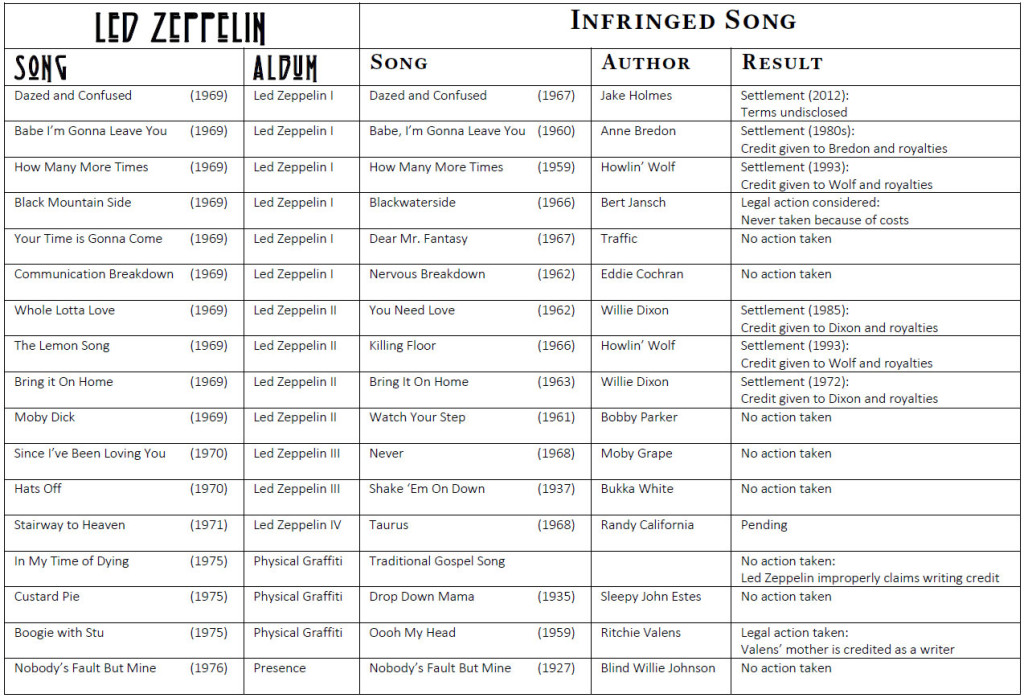 Should sleeping dogs be left to lie?

Led Zeppelin are using time as one of their defenses against the suit. They argue that so much time has gone by, four decades to be exact, that the claim has no basis, an objection that was overruled.

Nobody ever objected up until now.

The defendants have also tried to use the “they said we could use it” defense, while the estate of Randy (Wolfe) California claim that “Wolfe felt cheated by Led Zeppelin”. The court has ruled against Led Zeppelin on this one too.

The proper paperwork wasn’t filled out!

Lawyers for Led Zeppelin claim that “Spirit didn’t properly register the song with the copyright office”, so the plaintiff cannot sue for copyright infringement. The court rejected this argument.

There are some silly claims and accusations being made.

The burden of proof seems to lie at least partially with the plaintiff, in that they “must show that the defendants had a ‘reasonable opportunity’ of viewing the plaintiff’s work prior to the creation of the infringing work”. In other words, Spirit has to prove that Led Zeppelin heard the song. Good luck on that one, even though they have turned to a couple of L.A. Disc Jockeys named Mike and Robert Lee for testimony stating that the song “Taurus” was being played on the radio before 1971.  This “D.J. defense” is dubious at best.

Is it starting to sound like an episode of Beavis and Butthead?

Randy Wolfe’s sister Andrea has testified that Spirit played “Taurus“ often, as it served as an “acoustic palate cleanser amidst the predominantly electronic music”. I thought that’s what the sound check was for….

They’ve dragged The Beastie Boys into this argument; Newton v. Diamond, 204 F. Supp. 2d 1244. I guess Led Zeppelin is going to fight for their right (groan).

Page and Plant argue that “Stairway” is nothing more than a series of “A-minor descending chromatic bass lines lasting 13 seconds and separated by a bridge of either seven or eight measures”. A bass line? Why then has John Paul Jones been exempted from this lawsuit?

Jimmy Page has also claimed that the descending lines of the opening of the song were something he heard in “Chim Chim Cher-ee” from the soundtrack of Mary Poppins. Attorney Malofiy has dubbed this the “Mary Poppins defense”.  I think Dick Van Dyke should get in on this lawsuit then, but it begs the even bigger question:  Jimmy Page was sitting around listening to the soundtrack from Mary Poppins????  Say it ain’t so Jimmy.

Then there’s the “our song is AABAAB, and their song is AABAABAA”. Didn’t Vanilla Ice already try this defense with “Ice Ice Baby” when he ripped off Queen? The official ruling on this point is that “the court cannot definitely say based on the evidence provided that the two works bear a striking similarity”. So this part is going to be further argued by experts.

Finally, there’s the matter of “what if we lose” on Led Zeppelin’s part. They’ve asked the judge to only give Spirit half of what they are asking for because they waited so long, and that any award given be limited to profits earned only within the United States. The latter point is going to trial, while the former is up for appeal.

Oh, and to keep it real, the attorney for Randy Wolfe’s estate is accusing Led Zeppelin of the “falsification of Rock n’ Roll history”. The judge says that this is an “inventive yet legally baseless claim”. I wonder what the penalty for this crime is? Can they be sentenced to 5 years of house arrest at The Edgewater in Seattle (you know, the one with the mud sharks)?

To me, it should be pretty cut and dried. Listen to both songs. Do they sound the same or don’t they? Unfortunately, this is not to be the case. They are going to decide this case by comparing sheet music, not the actual recordings. So forget all those YouTube clips you’ve heard where they compare the two songs.

This isn’t just about songwriting credits, royalties, payback, and the reputation of the band.  What’s really at stake here could very well be the future of music itself.  As we get further and further away from what’s considered the golden era of poplular music, there is more of a tendency to borrow from the past.  Artists regularly sample other artists’s material.  If Led Zeppelin are found guilty it won’t be for an entire song, it will be for just the opening couple of minutes, and that is pretty scary when you think about it.  This could open the door to a flurry of lawsuits by artists claiming that fifteen seconds of their song is part of someone else’s hit record, and if that comes to fruition, people are going to be less inclined to draw from the well of past songs.  Creativity will take a hit, and that will hurt all of us.

If you care to slog through the actual documents, they can be found at: http://bit.ly/1ZCAz4v

Ivor Levene likes to interview musicians, write about music and musicians, play music, listen to music, read about music, photograph musicians, and anything else you can think of with music. He has been involved with the music scene for over thirty years and his posts have appeared all over the place! Ivor says "I'm going to write about music as long as I have something to say".
View all posts by Ivor Levene →
This entry was posted in Events, Miscellanious, Music, News & Sports and tagged #LedZeppelin #ClassicRock. Bookmark the permalink.

3 Responses to Led Zeppelin In Court (Again) In Los Angeles