Offbeat L.A.: Sauerkraut, Stout and a Side of Surreality… Old World Village in Huntington Beach 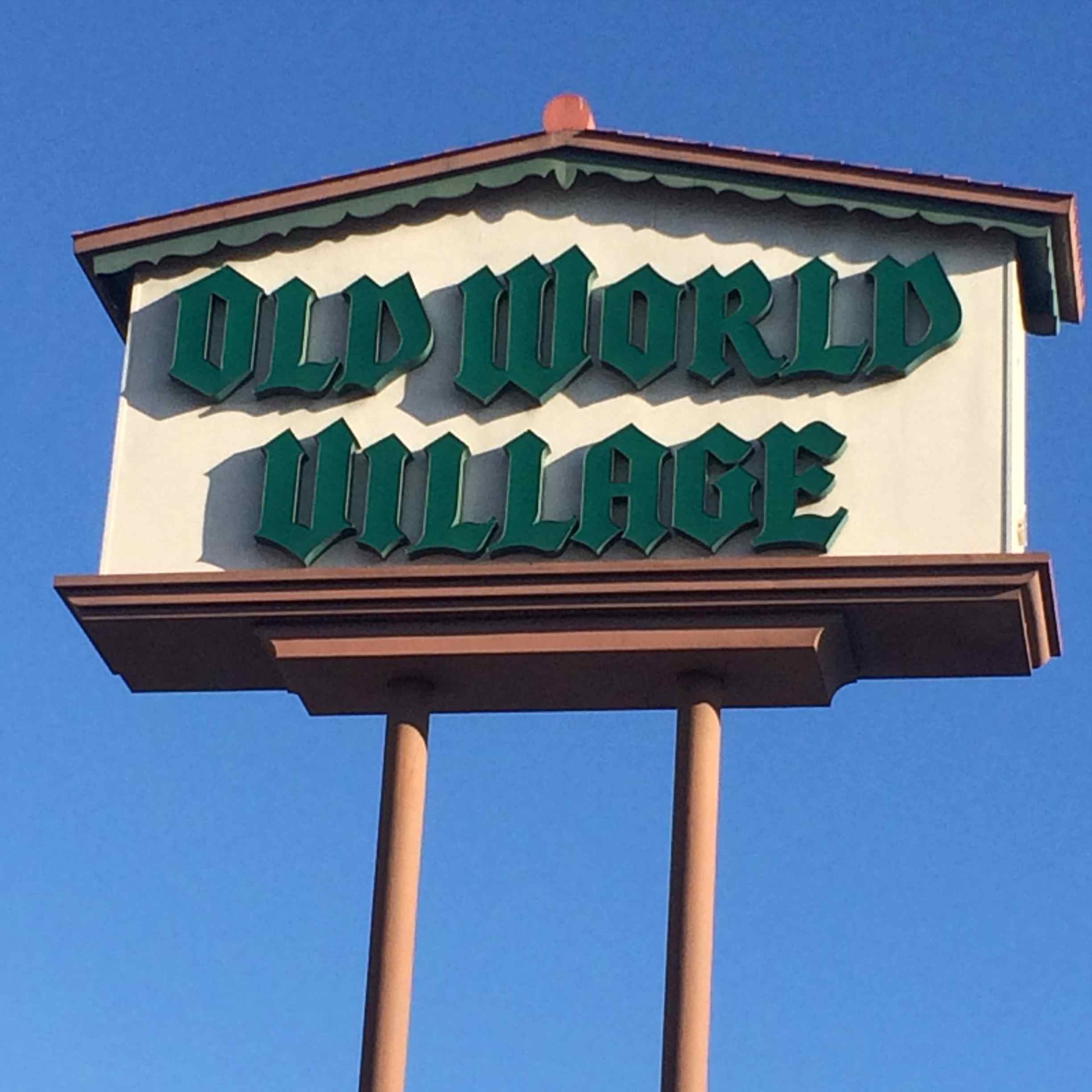 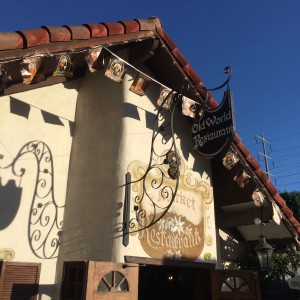 We are living in a time that is moving much too quickly. Technology is always one step ahead of us, and the gathering and processing of information comes at us from all directions, pretty much non-stop. Our outside environment, controlled by corporate chains and the money people, is creating an acceptance of homogeny. It is easier to built 5 identical clone restaurants, than to put originality into one unique one. I know on some level we all see this, all feel this, although we get caught up in convenience and frequent the clones, because it simplifies things. I think that is why there is such a love of vintage restaurants. It is not only nostalgia, but on some level our own soul’s rebellion. My mission with Offbeat L.A. is to highlight originality right here under our noses, to showcase what is available to visit today. These are things we might lose if proper attention is not paid. These are things that are special and should not be left to chance. 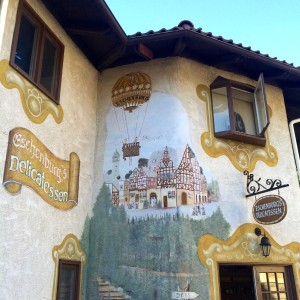 The Village (photo by Nikki Kreuzer)

Old World Village in Huntington Beach is one of those special places. It was built in 1978, as Orange County’s answer to Torrance’s Alpine Village, a European-styled collection of shops and a German-themed restaurant which opened a decade earlier. Old World Village was the realization of a dream by German immigrant, Josef Bischof, who had settled in the United States in 1952, deciding to recreate the quaint architecture of his homeland. Bischof created 50 shops with a Hansel and Gretel romanticism, including a church, a hotel and a rather large and impressive restaurant. Picturesque cobblestone pathways were laid to lead visitors through a 9-acre village of Bavarian-style boutiques, all with living quarters above them. Imported lanterns and 70 painted murals were installed to reflect a fairytale vision of Europe once upon a time… 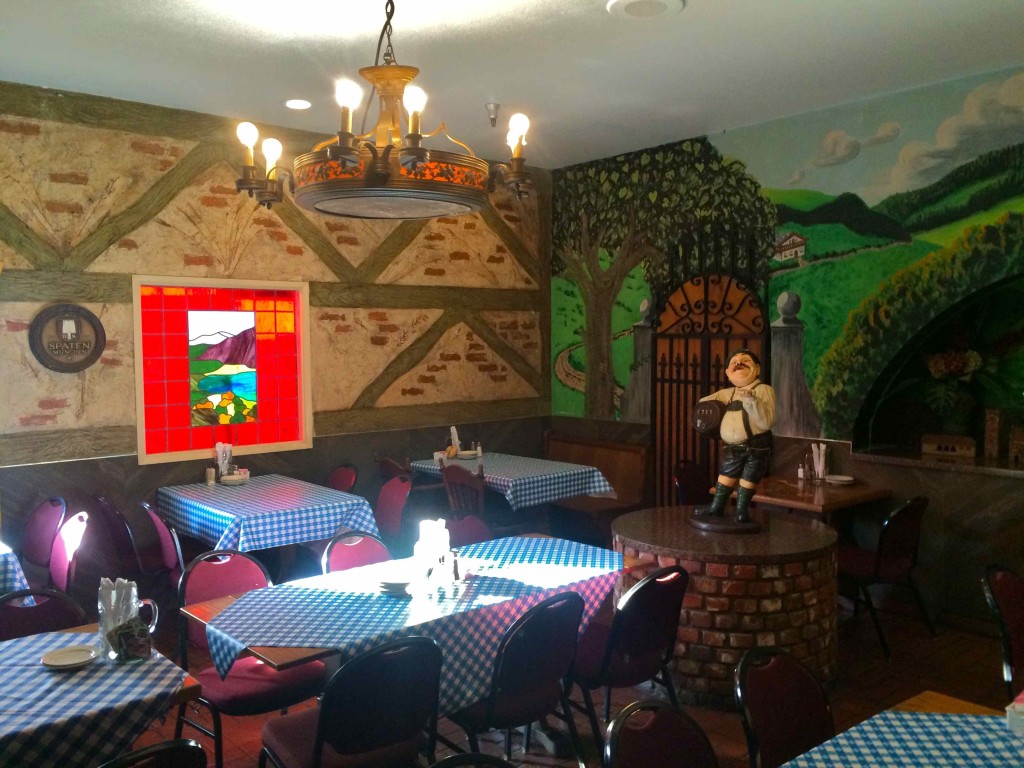 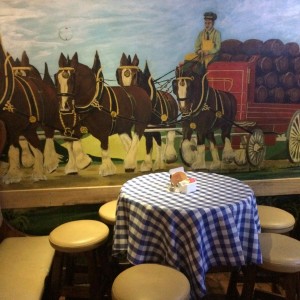 In the pub (photo by Nikki Kreuzer)

The hub of social activity is definitely the restaurant, and it is quite impressive. It is downright labyrinthian, with multiple rooms, a massive banquet hall with stage, an authentic pub featuring a large selection of German beer and an outdoor beer garden, including shuffleboard tables. Extremely popular starting in September for the Oktoberfest season, its kitschiness extends all year round with monthly Dachshund Races held on Sunday afternoons. Serving a healthy selection of German dishes, including bratwurst, sauerbraten, red cabbage, potato pancakes, wiener schnitzel and apple strudel, their German beer selection is also top notch. Live entertainment is often featured, and, of course, OomPah Pah bands during the Oktoberfest season. During July and August there are special festivals including German Heritage Day and Plum Fest. Check the Old World calendar for dates. The original owner, Josef, still resides at Old World, though the village is now run by his children. Make a point of visiting this cool and authentic piece of Southern California. It is perfect for a lazy Sunday afternoon with the family or for a fun adventure with friends. 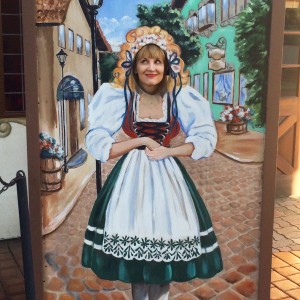 The author channeling her inner Frauline (photo by Thom Kreuzer) 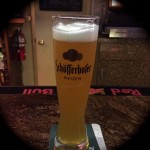 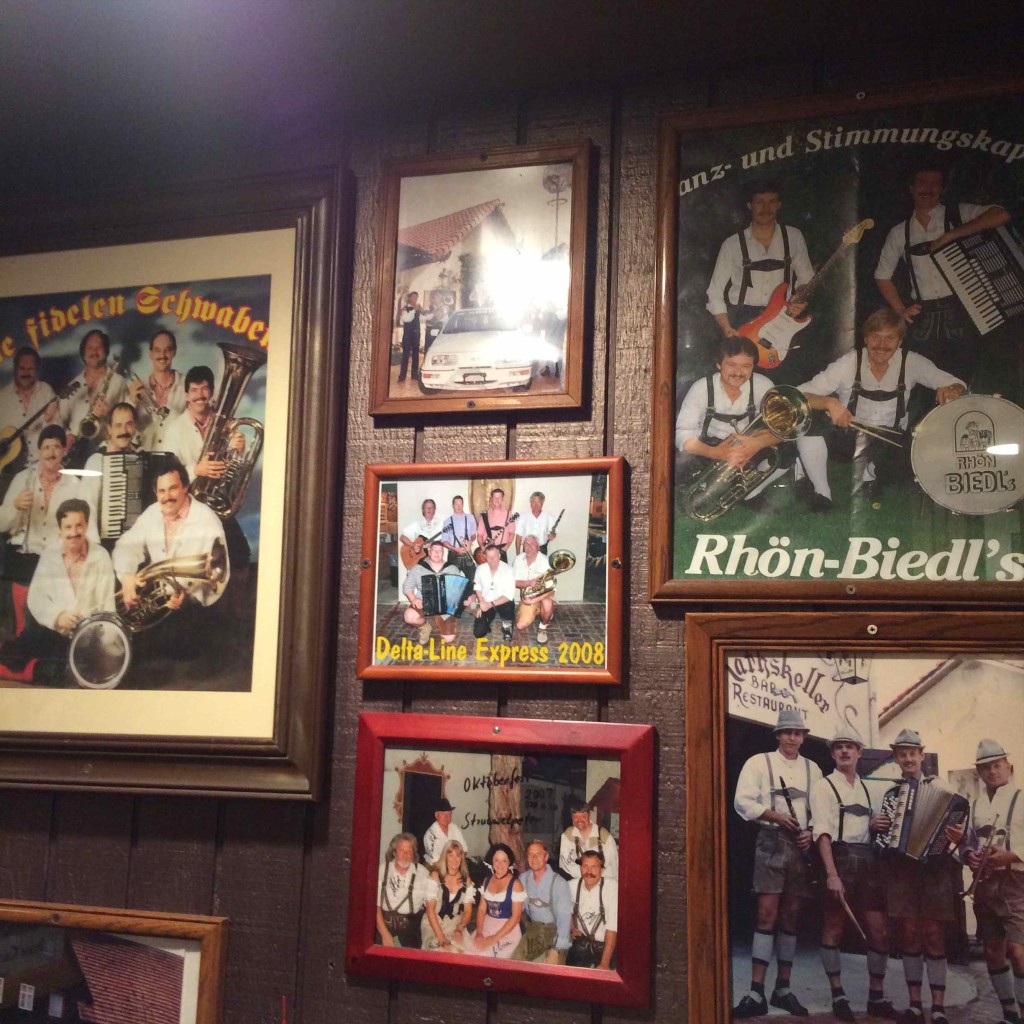 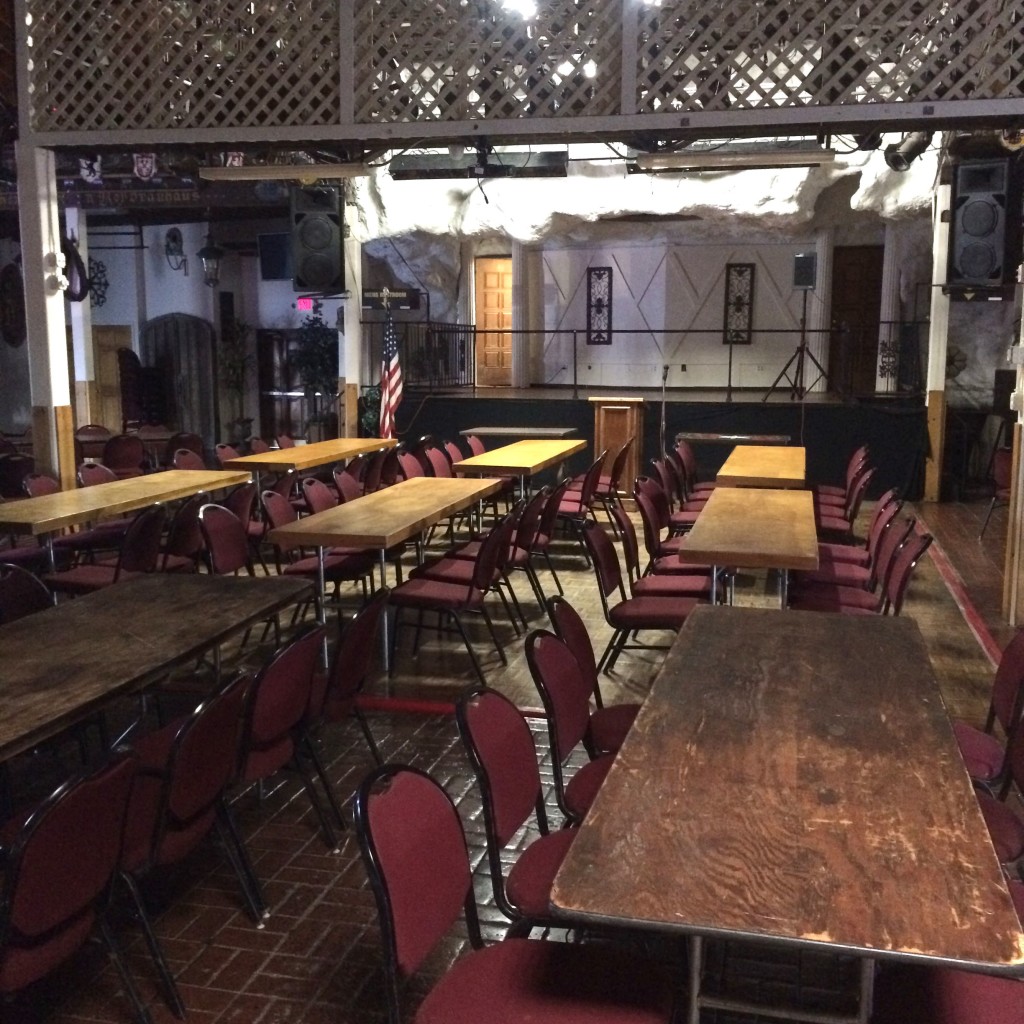 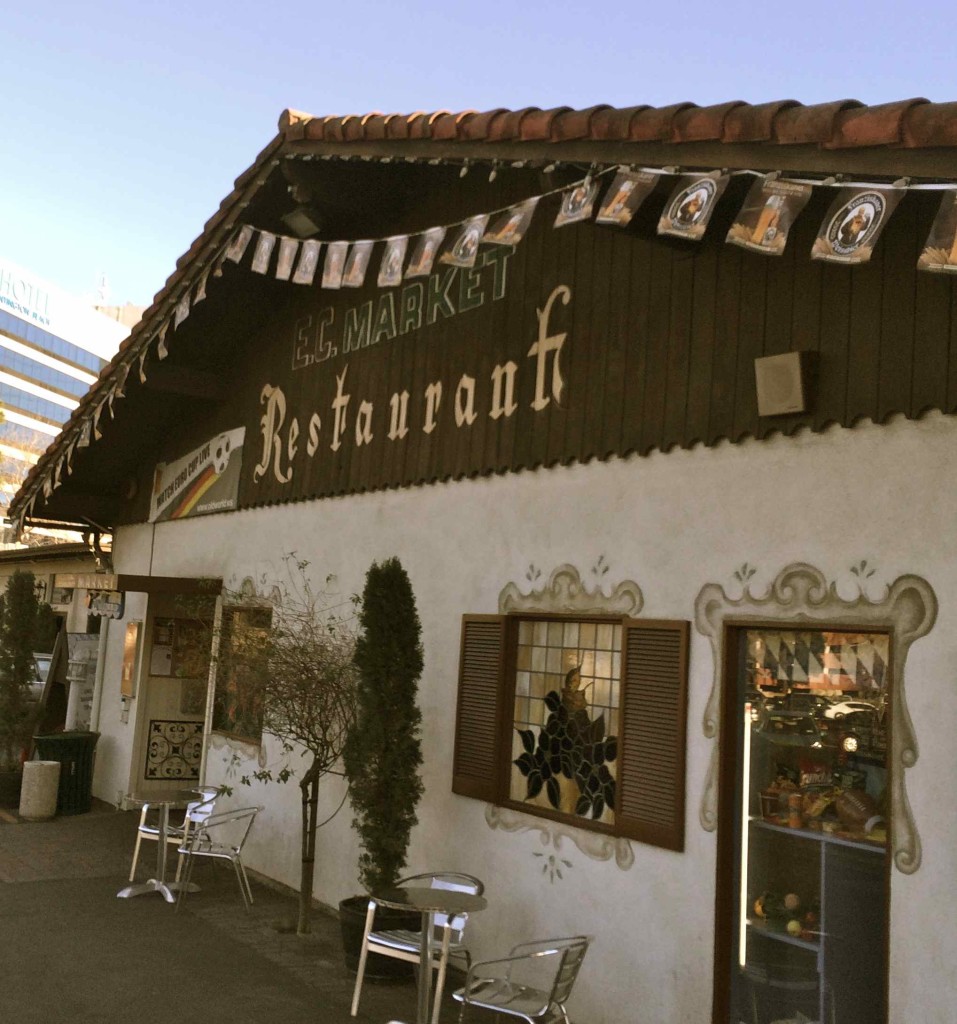 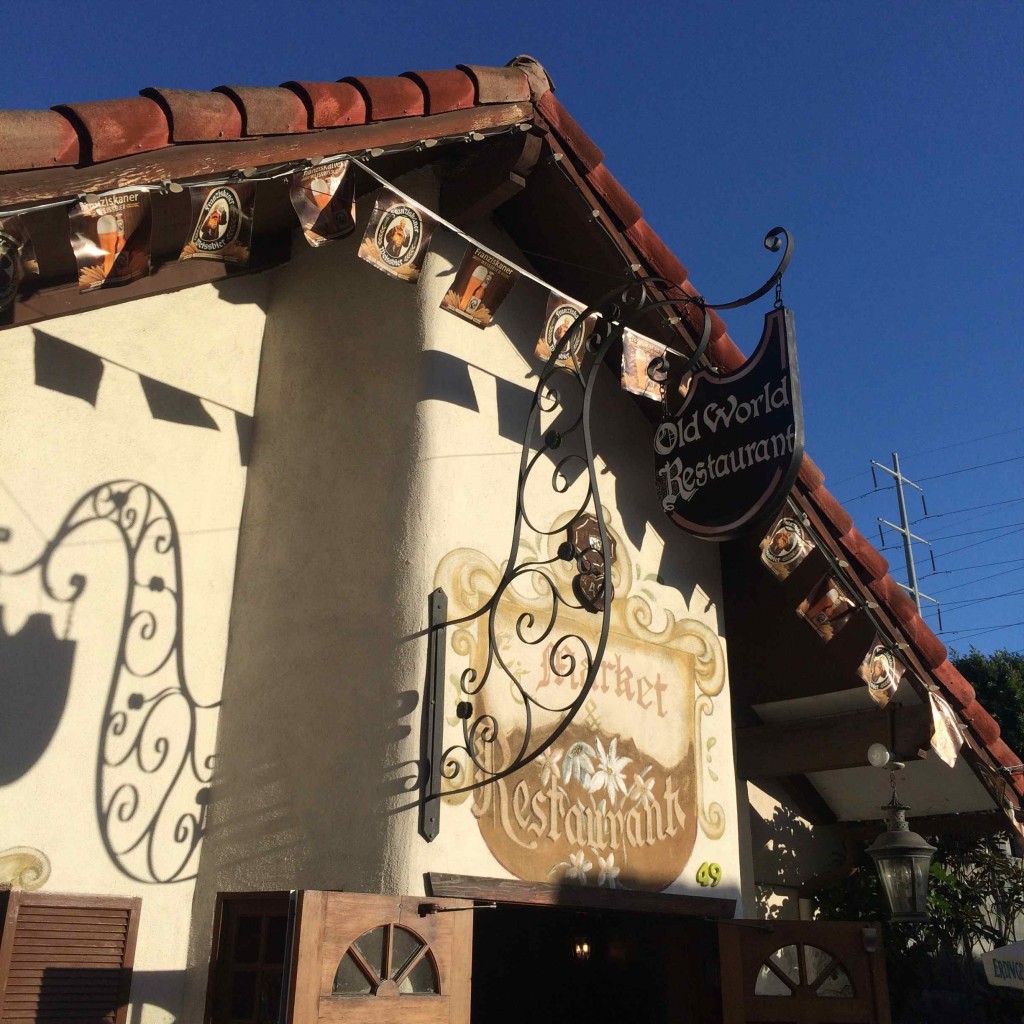 Nikki Kreuzer has been a Los Angeles resident for over 30 years. When not working her day job in the film & TV industry, she spends her time over many obsessions, mainly music, art and exploring & photographing the oddities of the city she adores. So far she has written 110 Offbeat L.A. articles, published at the Los Angeles Beat. As a journalist she contributes regularly to LA Weekly, Blurred Culture and The Los Angeles Beat and has also been published by Oddee.com, Twist Magazine, Strobe and Not For Hire. Nikki is also a mosaic artist, radio DJ and published photographer. Her photography has been featured in exhibit at the Museum of Neon Art, in print at the LA Weekly and is part of an upcoming show at the Neutra Museum in Los Angeles. She has recorded with the band Nikki & Candy as bassist, vocalist and songwriter, directing and appearing in the 'Sunshine Sunshine Santa Claus' music video for the band. She co-hosts the monthly radio show Bubblegum & Other Delights on Dublab.com. Her acting credits include a recent role in the ABC-TV show 'For The People', 'Incident at Guilt Ridge', 'Two and a Half Men', the film 'Minority Report' and 'Offbeat L.A.', a web series, written and hosted by Nikki Kreuzer. Her writing, radio and video portfolio can be found at OffbeatLA.com, her photography work @Lunabeat on Instagram and her music history posts @NikkiKreuzer on Twitter. Find Nikki & Candy music on iTunes, Amazon or at NikkiandCandy.com.
View all posts by Nikki Kreuzer →
This entry was posted in Food, Miscellanious, Offbeat LA. Bookmark the permalink.

2 Responses to Offbeat L.A.: Sauerkraut, Stout and a Side of Surreality… Old World Village in Huntington Beach