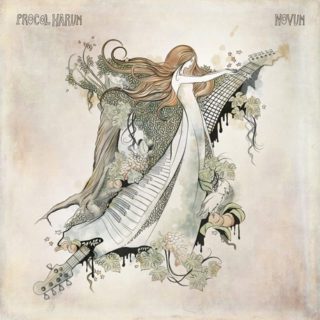 I was originally supposed to review this album, the latest by Procol Harum, back in April, you know, prior to its release. That would be the normal review process.  Listen to album, read the liner notes, and give your critical opinion. The reason I have been so tardy in delivering said review is that I’ve really been enjoying this album, it’s that good. Now, before you jump to any conclusions, I’ll tell you that this isn’t another “rock band from the 60’s tries to make yet another comeback” kind of album. The band never really left, they just took a fourteen-year hiatus.  Yes, this album does coincide with the band’s 50th anniversary, but that’s kind of beside the point.  This is so old school (in a good way), it kind of makes me wish that I had it on vinyl so I could burn it out like I did with all my other choice albums.  If that’s not enough throwback for you, the band is touring the U.K. and Europe in support of the album.

One might be tempted also to say that “Oh, there’s only one original member in the band”, but the band has been an ever-evolving entity, and they’ve been keeping on for a long time.  Led by founding member Gary Brooker, this particular iteration has been playing together since the early 1990’s, which is longer than a lot of bands stayed together.  They’ve got a pretty stellar lineup; Matt Pegg (Jethro Tull) on bass, Geoff Dunn (Jimmy Page, Dave Stewart, Van Morrison) on drums, Geoff Whitehorn (Paul Rodgers, Roger Daltrey) on guitar, and Josh Phillips (Pete Townsend, Midge Ure) on keyboards.  That in itself is a stellar lineup, and honestly the album kind of takes me back to Steely Dan.  It actually sounds in some ways like Steely Dan meets The Doobie Brothers.  The production is very lush and unlike most modern albums, it doesn’t sound dead-ended by compression.  It’s clear and crisp in much the same way that the aforementioned groups were.

But we’re missing something here, right?  The lyrics.  What, I wondered, could a group that’s had so many miles on them find to still write about?   That’s got to be a tough road to travel.  It is, except when you have a secret weapon by the name of Pete Brown.  If you were paying attention way back when, you’ll know who Mr. Brown is, and if not, he was the lyricist for Cream, the man who co-wrote all those great blues-rock classics with Jack Bruce.  So if you’re a lyrics kind of listener, you’re really in for a treat with this album.

So what does this album sound like overall?  In a word (or two) lush and thoughtful.  This album is something that everyone who ever said “why don’t they make music like that any more” should definitely pick up.  The only problem is that I can’t ask that particular question any more, but that’s a good thing.  Record reviews are a funny thing, because they’re essentially just subjective and highly personal opinions.  In this case however, I think you should take my word for it and have a listen!

Ivor Levene likes to interview musicians, write about music and musicians, play music, listen to music, read about music, photograph musicians, and anything else you can think of with music. He has been involved with the music scene for over thirty years and his posts have appeared all over the place! Ivor says "I'm going to write about music as long as I have something to say".
View all posts by Ivor Levene →
This entry was posted in Music and tagged #procolharum. Bookmark the permalink.