In a Bittersweet Reprieve, the ‘Stinko’ Gets a New Home in Neighboring South Pasadena 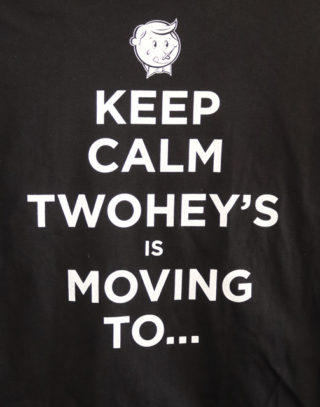 After announcing the close of their Alhambra restaurant last month, the original Twohey’s Restaurant will now be moving to South Pasadena in the Spring of 2018.

With recent negotiations to renew their lease in Alhambra unsuccessful, the original Twohey’s Restaurant will now relocate to their neighbor city of South Pasadena.

Twohey’s originally opened in Pasadena in 1943 on Arroyo Blvd where it then moved to its current Alhambra location at the Huntington Drive and Atlantic Boulevard a decade later.

“Keeping Twohey’s alive is very important to us,” said owner Jim Christos. “The original one was called Davey Jones Locker on Arroyo Parkway, where Jack Twohey bought it and then made that into a Twohey’s.”

The Twohey’s in Alhambra, which the Christos’ family has owned for 20 years, has been there since 1951, a location that is virtually a tri-crossroad to Alhambra, South Pasadena and San Marino, said Christos. 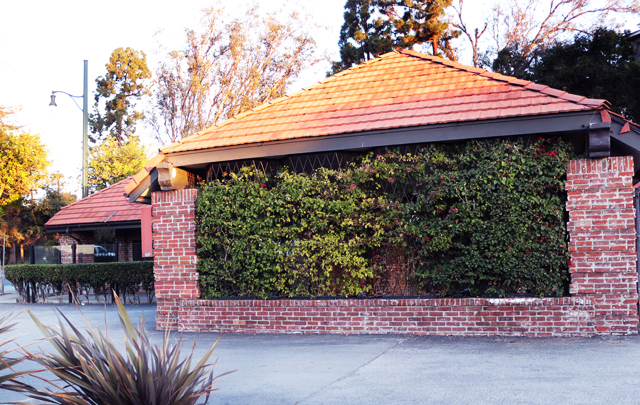 Christos said that friends of the family who live in South Pasadena have been contacting him excited over the move to South Pasadena, where the restaurant is already a member of the South Pasadena Chamber of Commerce.

Assuring signs posted on the doors of the restaurant along with staff t-shirts that advise to “Keep Calm. Twohey’s is Moving To…” on the front, with the new location’s address on the back, excited regular patrons where one stated with relief “I’ve been coming here for almost 30 years. Since high school!”

The new 6,000 sq ft location is near-equal in size to that of Twohey’s Alhambra and is a prime corner location in the Fair Oaks shopping center at Fair Oaks and State Street, where the restaurant will benefit from its expansive parking.

The handsome 1963 building of decorative brick and evergreen was recently occupied by Craft Hill, and prior to that was another popular long-time local favorite, Carmine’s Italian Restaurant. 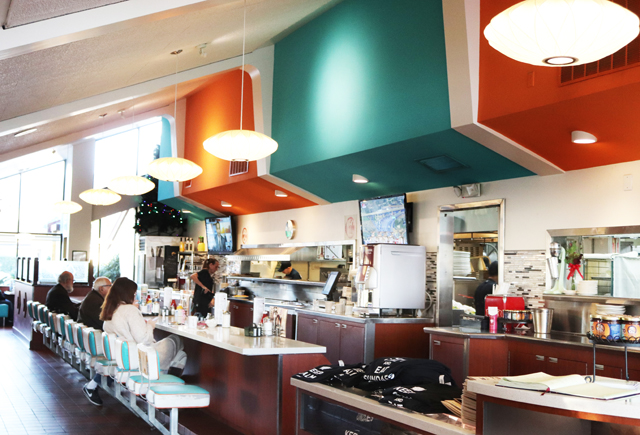 Photo by Monique A. LeBleu
Twohey’s Restaurant in Alhambra, January 26, 2018. The restaurant has lost its lease and is moving to South Pasadena in the Spring of 2018.

Although the lease agreement at the Alhambra location expires soon, Christos also stated that they will be able to stay on month-to-month basis in order to keep the staff employed and serve customers during the transition.

Christos’ family just recently opened  another addition to their restaurant family, Twohey’s Tavern in Pasadena, in the Fall of 2018 where the legendary Stinko Burger has been dubbed the Stinko 2.0 with caramelized onions in lieu of the generous fresh round slice of onion found in the original.

At least 80-90% of Twohey’s menu will likely carry over elements that are popular with the restaurant’s current base patrons. But after the initial word got out to customers that the restaurant was due to close, people wanted souvenirs.

Any new plans for changes to the interior design of the future space are still pending, but it will likely be more “modern and timeless” according to Christos. But he does hope to retain some elements, and said there may be a public sale of some of the existing wall art, photographs or even the lucite-encased vintage car models recalling the days when Twohey’s had drive-up car service in the adjacent space now currently occupied by In-N-Out Burger.

The fate of the landmark restaurant’s iconic Stinko neon sign is also pending. Christos said they are working with the city and the city’s design board into how to best save it or incorporate it into the new South Pasadena location. 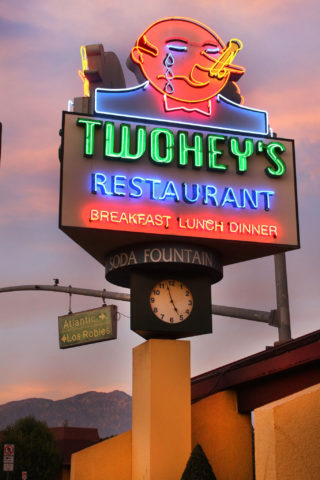 Photo Courtesy of Twohey’s Restaurant.
The original landmark restaurant in Alhambra has lost its lease and is to close February 1, 2018.

“It’s a showcase, it’s a vintage piece,” Christos said, “But trying to conform to new sign regulations [is a factor]. So it will not be the same. But it will have some element of it. But we are trying to save it and they’re working with us.”

“A heartfelt thanks to Alhambra. We really didn’t want to move. We still feel like it’s our home,” said Christos “But it’s a new chapter for us. A little exciting — and no pun intended — a little bittersweet.” 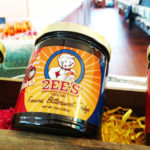 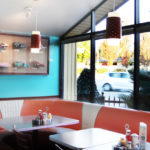 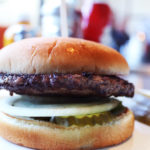 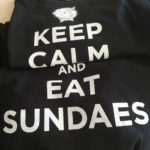 Monique A. LeBleu is a writer, photographer, videographer, and shameless foodie and wineaux. A love of film history and a background in film production, post-production, and film theory provide unique insights into her movie reviews. As well, a background in technical theater fuels her passion on all-things theater. As a foodie, living in the ever-growing and diverse culinary landscape that is the City of Los Angeles feeds her never-ending pursuit of the perfect comfort food—the world's best Mac n' Cheese!
View all posts by Monique A. LeBleu →
This entry was posted in Food and tagged alhambra, Jim Christos, Monique A LeBleu, Pasadena, South Pasadena, stinko 2.0, stinko burger, The L.A. Beat, the los angeles beat, Twoheys, twoheys tavern. Bookmark the permalink.