Movies Till Dawn: The Saturday Morning Strange – A Surfeit of Strange 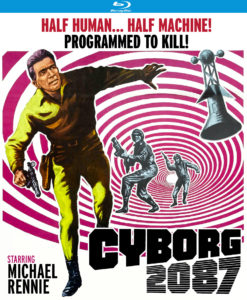 You could spend all of 2018 dissecting and bemoaning the strange, weird and just plain awful aspects of 2017, but on Saturday mornings, I prefer to recall the strange from that year in a entertaining, digital-based audio-visual format and not, say, soul-blanching or near-apocalyptic. Case in point: “Cyborg 2087” (1966, Kino Lorber), which finds star Michael Rennie (“The Day the Earth Stood still) again in otherworldly mode, this time as a robotic agent sent from the titular year (a la “The Terminator”) to stop scientist Eduard Franz from creating a mind control device that will eventually fall into the hands of a totalitarian government (sort of like Breitbart News). “Cyborg 2087” has abundant production and logic flaws, but like many low-budget genre films, those aspects can also be the most enjoyable elements (like Rennie’s Moonage Daydream boots, or the full-stop in the plot to allow Sherry Alberoni – later a prolific cartoon voice actor – and her pals to dance like fools in dad Warren Stevens’ living room). As such, it’s low-calorie, high-fructose fun, much in line with some of director Franklin Adreon and screenwriter Arthur C. Pierce‘s other genre efforts (like the serial “Panther Girl of the Congo” and “The Navy vs. the Night Monsters,” respectively); Kino’s Blu-ray includes the original trailer and kvetchy commentary by Chris Alexander.

There’s more strange to absorb in Blue Underground’s “Amsterdamned” (1988), a caffeinated Dutch-made thriller from Dick Maas – director of the eccentric elevator horror “The Lift” – about a detective’s pursuit of a killer who uses Amsterdam’s canal system to prey on victims. Maas stages some eye-popping action sequences throughout the city that offset the giallo-lite storyline; Blue Underground’s Blu-ray is flush with extras, including commentary by Maas, a making-of featurette and interviews with cast and crew, including stunt coordinator Dickey Beer. There were reported image issues with the initial Blu-ray pressing, though these have apparently been addressed or alleviated. 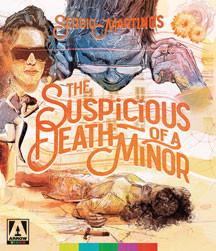 Continental mayhem is also on the menu for “Suspicious Death of a Minor” (1975, Arrow Video), a curious recipe of giallo-style murders, ham-fisted police action (with an emphasis on fists, which are applied by undercover cop Claudio Cassinelli to nearly every member of the cast) and unexpected flashes of freewheeling physical comedy, all of which are grafted, with varying degrees of success, onto a fairly serious thriller framework about human trafficking. It’s an oddity, to be sure (and the aforementioned elements don’t even begin to touch moments like the rollercoaster shootout), and probably best appreciated by those whose attitude toward Italian genre films is less than reverential; Arrow’s Blu-ray includes informative commentary by author Troy Howarth and a recent interview with the prolific director Sergio Martino. 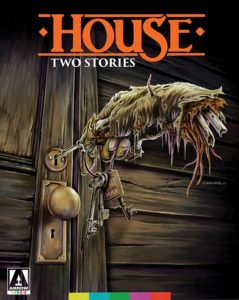 Arrow also has “House: Two Stories,” a two-disc set compiling both “House” (1985) and its sequel, “House II: The Second Story” (1987). I’ve never understood why these films have a following, though it’s arguable that the first “House” – with William Katt as a faded horror novelist contending with an inherited house full of spooks and his own Vietnam PTSD (!) – has cult cache thanks to its behind-the-scenes players, including producers Sean Cunningham (“Friday the 13th“) and an uncredited Roger Corman, director Steve Miner (“Warlock“) and co-writer Fred Dekker (“The Monster Squad”). But the sequel, which doubles the number of potential frightened people and adds an ornery, long-dead cowpoke (Royal Dano), illustrates the mess that usually happens when you mix humor and suspense. But I’m in the minority here, as evidenced by Arrow’s set, which offers to its dedicated fanbase commentary by Cunningham, Miner and others on their respective efforts, and some sizable and detailed making-of featurettes. 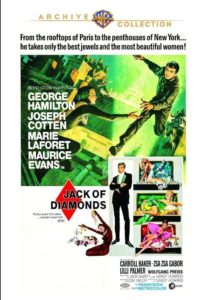 There’s more stylish than stylized action on hand in “Jack of Diamonds” (1967, Warner Archives Collection), with George Hamilton displaying weapons-grade charm and sartorial skills as the Jack of Diamonds, a jewel thief who relieves Zsa Zsa Gabor, Carroll Baker and Lili Palmer (all playing Hollywood-ized versions of themselves) before teaming up with the equally larcenous Maurice Evans and Marie Laforet to raid a vault in Paris. It’s nonsense – especially when Hamilton adds trapeze work to his burglary skills – but high-gloss and entirely watchable nonsense, thanks to its glamorous and well-appointed leads, support from old pros like Evans and Joseph Cotten, a fizzy score by Peter Thomas and location shooting in some of the glitzier parts of Bavaria.

Paul Gaita lives in Sherman Oaks, California with his lovely wife and daughter. He has written for The Los Angeles Times, LA Weekly, Variety and The Fix, among many other publications, and was a home video reviewer for Amazon.com from 1998 to 2014. He has interviewed countless entertainment figures from both the A and Z lists, but his favorites remain Elmore Leonard, Ray Bradbury and George Newall, who created both Schoolhouse Rock and the Hai Karate aftershave commercials. He once shared a Thanksgiving dinner with celebrity astrologer Joyce Jillson, and regrettably, still owes the late character actor Charles Napier a dollar.
View all posts by Paul Gaita →
This entry was posted in Movies and tagged Arrow Video, Blue Underground, Kino Lorber, Warner Archives Collection. Bookmark the permalink.