The Alamo: A Beautifully Written and Acted Play About the Difficulty of Change 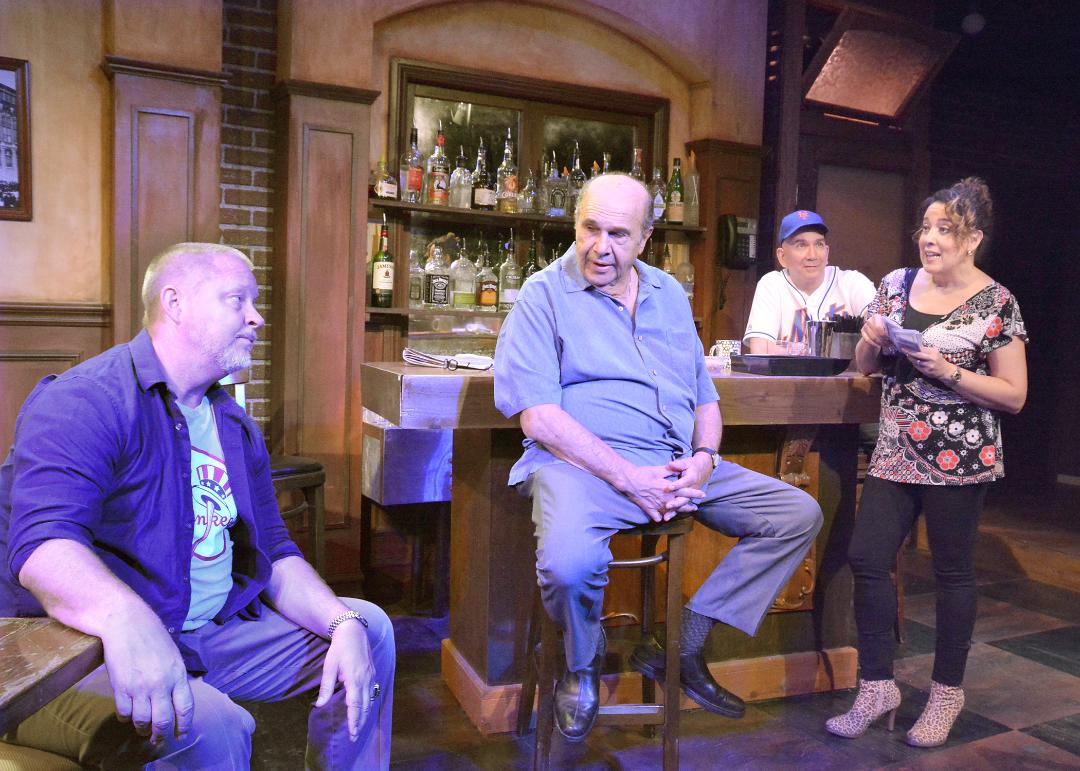 How many of us have returned to our childhood neighborhood and have had a hard time recognizing it? That’s especially true for me. I was born in Brooklyn in an upper middle class neighborhood. It was safe and everyone looked out for one another. But just a half hour away by car, there were other neighborhoods that I was told never to visit. They were gang infested and dangerous. Well, now those dangerous neighborhoods are filled with million dollar condos, expensive boutiques and edgy art galleries proving that the saying “everything changes; nothing stays the same” is more than true. Change is exactly the dilemma facing the characters in the Italian-American blue-collar Bay Ridge section of Brooklyn. Bay Ridge is being gentrified and the regulars at “The Alamo,” a neighborhood bar, are having a very hard time with that. It’s here that Joey (the marvelous Bobby Costanzo), Dominic (John Lacy) and Tick (Jack Merrill) have been coming for years. It’s their second home. From the roof of The Alamo, they watched as the Twin Towers fell, taking down their relatives, friends, and neighbors. The three men want the place to stay exactly the same. But unfortunately for them, the bar’s owner Munce (Tim True) and his wife, Carmen (the wonderful Eileen Galindo) have other ideas. Munce and Carmen are planning to turn the place into a hip hangout for the artists and the millennials who have moved into the neighborhood.  But Joey, Dominic, and Tick fear if The Alamo changes to accommodate the new arrivals, they will no longer be welcomed.

“The Alamo,” beautifully directed by Kent Thompson is an outstanding piece of theatre. Not only are the actors, including Mary (Milica Govich) a woman dealing with the loss of her husband, her daughter, Micaela (Kelsey Griswold) a girl deciding what to do with her life, and Claudine (Nancy Georgini) a woman realizing her marriage has been a sham, are  all at the top of their game. The play, written by Ian McRae, takes on issues of race, the Vietnam and Iraq wars, politics, and nativism. It’s funny, touching, and at times heartbreaking. I found myself so engrossed in the lives of these characters caring about every one of them. It’s definitely a ‘must see’ for anyone who loves theatre.

Joan was born in Brooklyn and spent many years working as an actress in New York City. Even though she traveled extensively, Joan couldn't imagine living anywhere else.. Well one day, she met someone at a party who regaled her with stories about living in L. A. specifically Topanga Canyon. A few weeks later she found herself on an airplane bound for Los Angeles. Joan immediately fell in love with the town and has been living here for the last twenty years and yes, she even made it to Topanga Canyon, where she now resides, surrounded by nature, deer, owls and all kinds of extraordinary alien creatures.. Joan continued acting, but for the last several years (besides reviewing plays and film) she has been writing screenplays. Joan was married to a filmmaker who created the cult classic films, (way before she knew him) Faces of Death. As a result of his huge following, they created a funny movie review show entitled Two Jews on Film, where Joan and her husband, John would review movies and rate them with bagels You can see their reviews by going to youtube.com/twojewsonfilm. Although it's now only one Jew - Joan is occasionally joined by her beautiful Pekingnese and Japanese Chin.
View all posts by Joan Alperin →
This entry was posted in Theater and tagged 'The Alamo' play review, Bay Ridge, Bobby Costanzo, Brooklyn, Comedy, Drama, New York, The Alamo, The Ruskin Group Theatre, The Ruskin Theatre in Santa Monica. Bookmark the permalink.