It’s Time for the 2018 Festival of Books—Right Now 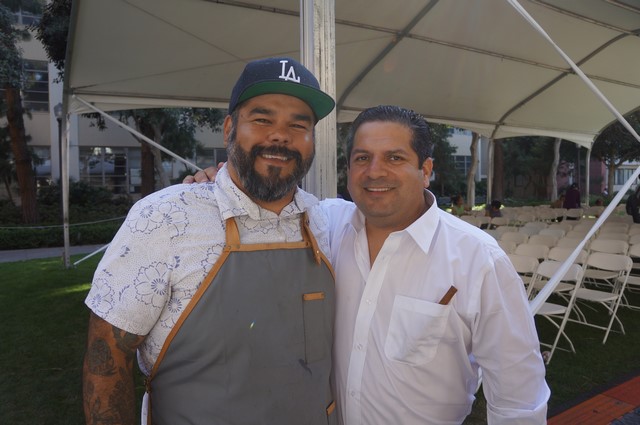 In what has become the largest literary festival in America, The LA Times’ Festival of Books returns to the expansive campus of USC this weekend. On Saturday and Sunday, April 21st and 22nd, over 500 writers, chefs, artists and exhibitors will participate in panels, signings, cooking demos, virtual reality and gaming. Numbered conversations require reserved (FREE) tickets. Get them here.

There is not a lot of shade, so bring a hat and sunscreen, a strong bag for all of the books you will want to buy, and comfortable shoes. There are always good food trucks, but while you are in the neighborhood, we recommend you hit The Mercado Paloma for Salibutes from Chichen Itza, or a cooling aguachile from its sister restaurant, Holbox. Unfortunately, there aren’t any cool punk rock panels this year, but here are some of our recommended events…

10:00 a.m. – Juan Felipe Herrara, the United States Poet Laureate, reading from “Jabberwalking” (Poetry Stage). Jabberwalking is a children’s book about finding your own voice and speaking up for others wherever you might be. Hear it read by America’s first Mexican-American Poet Laureate.

10:30 a.m. KRS-One, hip-hop lyrical legend, philosopher and historian, discusses a variety of projects including his upcoming biography, the social and political conscience of hip hop, and the preservation of hip hop. (Broccoli Theatre)

11:00 a.m. – Authors of “The Grouchy Historian,” Ed Asner and Ed Weinberger in conversation with journalist and author Pat Morrison (Los Angeles Times Main Stage). We must point out that Ed Asner was not at all grouchy with us.

12:10 p.m. – Vivica A. Fox, author of “Every Day I’m Hustling,” in conversation (Los Angeles Times Main Stage). A personal story with a message. You can’t sit around waiting for things to fall in your lap. You’ve got to get out there and make your own luck.

12:30 p.m. – “Outlander” on Page and Screen in conversation with Diana Gabaldon, author of the Outlander series (Bovard Auditorium). The Outlander series of “historical novels” for women who wouldn’t be caught dead reading Barbara Cartland has been revived and become even more of a cult sensation with the recent series on Starz. The books are compelling and funny, and you have to admire an author who creates fiery love scenes between 50-year-olds.

12:30 p.m. Grammy & Emmy Winner and Songwriters Hall of Fame ‘18 Inductee Allee Willis Shares Her Life in Song. Allee Willis is the queen of catchy lyrics, known for everything from the theme to “Friends” to Earth, Wind & Fire’s “September” and recently the musical version of “The Color Purple.” An aficionado of kitsch and mid-century modern, she will charm the pants off of you. (Newstory Stage)

2:00 p.m. Food: The New Culture, Conversation 1113 moderated by Gustavo Arellano, California columnist for the Los Angeles Times opinion section and author of “Taco USA: How Mexican Food Conquered America,” with Andrew Friedman, author of “Knives at Dawn,” about the Bocuse d’Or competition; co-editor of the popular anthology “Don’t Try This at Home,” and co-author of more than two dozen cookbooks, and Dan Stone, a writer on environmental science, agriculture, and botany in Washington D.C.

2:00 p.m. Jet Tila, Author of “101 Asian Dishes You Need to Cook Before You Die” presented by Pacific Sales It’s a tough choice for foodies.

3:30 p.m. – Social Media as Literary Discovery, curated by Editor in Chief of NYLON Marty Preciado (Andrus Gerontology Center). I think I have an idea of what this subject entails, but it could be a complete surprise. Either way, it’s intriguing.

4:30 p.m. – Black Eyed Peas’ will.i.am., Taboo, and apl.de.ap. discuss their graphic novel “Masters of the Sun.” This allegorical tale is about an Egyptian sun god who turns drug dealers and gangsters into zombies. How can you go wrong?

11:00 a.m. – Jenna Fischer, actress and author of “The Actor’s Life” in conversation with LA Times television reporter Yvonne Villarreal (Los Angeles Times Main Stage). We loved Pam Beesley in “The Office,” and would fangirl out over anything she does.

12:00 p.m. – Conversation on The Evolution of Mexican Food in Los Angeles, with Wes Avila (author of “Guerrilla Tacos: Recipes from the Streets of L.A.”) and Bill Esparza, author of L.A. Mexicano, moderated by USC professor of food culture and activism Sarah Portnoy (Wallis Annenberg Hall). These two authors have great chemistry and know their shit.

12:30 p.m. – Actor Patton Oswalt in conversation with LA Times Book Editor Carolyn Kellogg (Bovard Auditorium). Two of our favorite people in conversation. Oswalt is perhaps the most likeable comedian in LA. With an Emmy for comedy writing, experience writing and geeking out over comic books and a connection to true crime writing through his late wife, it will be interesting to see where the conversation leads.

12:30 p.m. – To Die For: Scientific and Cultural Responses to Death, Conversation 1112 with Gabrielle Birkner, the co-founder of the website Modern Loss, Caitlin Doughty, host and creator of “Ask a Mortician” founder of the Order of the Good Death, and Michael Shermer, Publisher of Skeptic magazine. (Seeley J Mudd Signing Area 4)

1:30 p.m. – Laurie Halse Anderson, author of “Speak and Chains,” and Emily Carroll, author of illustrated works like “His Face All Red,” in conversation with Sharon Levin (Seeley G. Mudd 123). Anderson writes young adult books and graphic novels about high school outsiders. Emily Carroll’s work, is not as easily summed up, but check it out via the link and you will be hooked.

4:00 p.m. – “Cover to Cover”: Musicians, Comedians and Authors Perform the Works that Inspired Them.  Hosted by actor and improviser Tawny Newsome. (Newstory Stage)