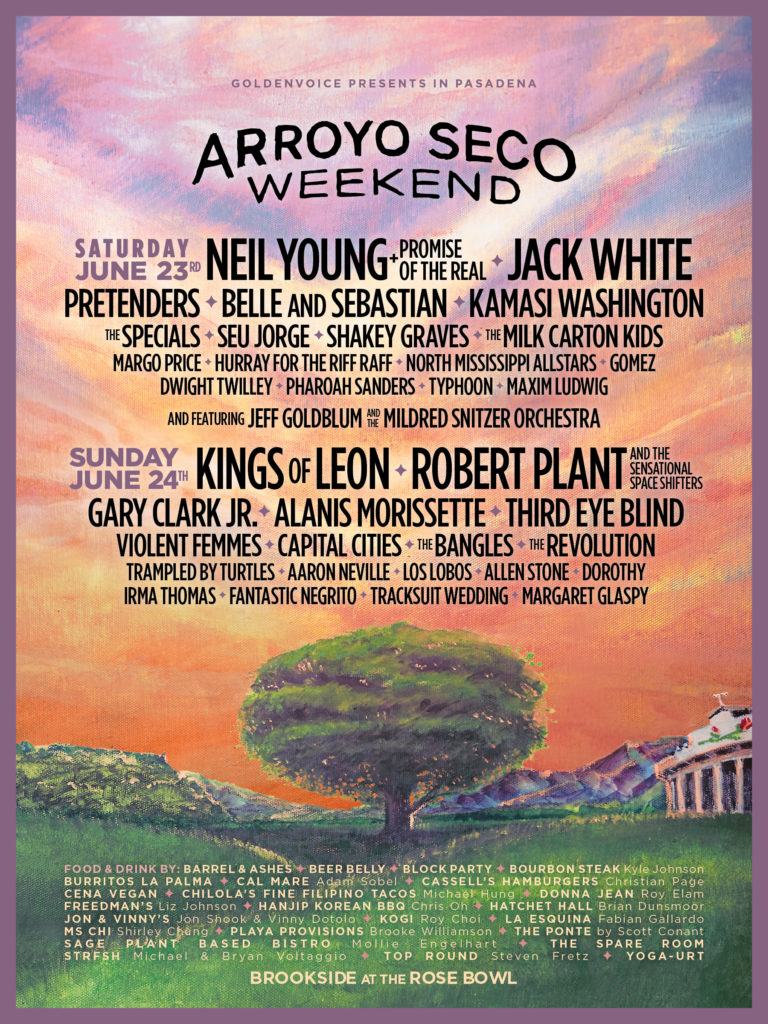 The 2-day Arroyo Seco food and music festival made its debut just last year, but it is already one of the hottest events in Southern California. Goldenvoice is the same team that is behind Coachella and the FYF Festival, so obviously these guys know what they’re doing.

The lineup is a music lovers dream. On Saturday, June 23, 2018, classic rocker Neil Young plus Promise of the Real, the Kid catcher of the 21st century, Jack White, The Pretenders, Belle and Sebastian, Kamasi Washington, ska pioneers The Specials, Jeff Goldblum, who just received a star on the Hollywood Walk of Fame, and Seu George, who sang Bowie songs in Portuguese for The Life Aquatic soundtrack, are among the fantastic musical acts that will be performing.

Now, music is not the only thing this awesome weekend event has to offer. Arroyo Seco Weekend is almost as much of a food festival as it is a music one. The weekend will feature an eclectic mix of bites and beverages courtesy of some of the most popular restaurants and food trucks from around Los Angeles.

Also on site will be Pasadena’s acclaimed Kidspace Museum with a tent of activities to keep children happy. Also on hand will be the NASA Jet Propulsion Laboratory with an exclusive Intergalactic Travel Lounge. In other words, there is something for everyone. This is a perfect event for families, friends, and people of all ages. Personally, I can’t think of a more perfect way to kick off the summer. The festival runs Saturday, June 23, 2018, and Sunday, June 24, 2018, from noon to 6:00 p.m.

To purchase tickets or for any questions, call 855-273-4481.  For more information about the festival, please go to arroyosecoweekend.com. Arroyo Seco is taking place at Brookside at the Rose Bowl, 1133 Rosemont Avenue, Pasadena CA 91103.

Joan was born in Brooklyn and spent many years working as an actress in New York City. Even though she traveled extensively, Joan couldn't imagine living anywhere else.. Well one day, she met someone at a party who regaled her with stories about living in L. A. specifically Topanga Canyon. A few weeks later she found herself on an airplane bound for Los Angeles. Joan immediately fell in love with the town and has been living here for the last twenty years and yes, she even made it to Topanga Canyon, where she now resides, surrounded by nature, deer, owls and all kinds of extraordinary alien creatures.. Joan continued acting, but for the last several years (besides reviewing plays and film) she has been writing screenplays. Joan was married to a filmmaker who created the cult classic films, (way before she knew him) Faces of Death. As a result of his huge following, they created a funny movie review show entitled Two Jews on Film, where Joan and her husband, John would review movies and rate them with bagels You can see their reviews by going to youtube.com/twojewsonfilm. Although it's now only one Jew - Joan is occasionally joined by her beautiful Pekingnese and Japanese Chin.
View all posts by Joan Alperin →
This entry was posted in Events, Food, Music, Upcoming Events and tagged Alanis Morissette, Arroyo Seco Weekend, Goldenvoice, Hanjip Korean BBQ, Jack White, Jeff Goldblum, Kidspace, Kings of Leon, los lobos, music festival, neil young, Pasadena, Pharaoh Sanders, robert plant, The Bangles, The Specials, Third Eye Blind, Violent Femmes. Bookmark the permalink.