Movies Till Dawn: The Other Side of Summer Edition 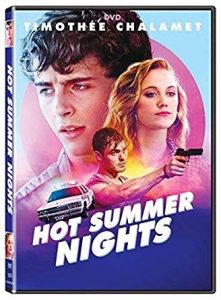 “Hot Summer Nights” (2018, Lionsgate) Lonely Timothee Chalamet finds distraction from the loss of his father in selling marijuana with small town demi-god Alex Roe and his bad-girl sister Maika Monroe (“It Follows”) on Cape Cod circa 1991. First time writer-director Elijah Bynum‘s cautionary tale is beautifully appointed in terms of photography and soundtrack (which includes Can, Martin Rev and Nilsson) but in execution, it’s a well-intentioned but ultimately leaden catalog of style and wildly divergent plotting borrowed from other films, though it does help that he has an excellent cast (including Thomas Jane and William Fichtner as unreliable adults) to make the low-wattage danger seem like something approaching cool. Lionsgate’s DVD includes commentary by Bynum and actor Emory Cohen (who plays Roe’s distributor) and a making-of doc. 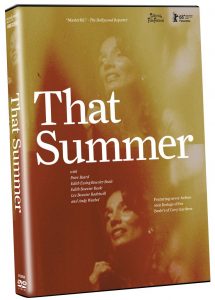 “That Summer” (2018, IFC) Fans of “Grey Gardens” may be thrilled to spend more time with Big Edie and Little Edie Bouvier Beale, the mother-daughter duo that made the Maysles Brothers’ 1975 documentary a catchphrase for eccentricity, faded glory and overly intimate familial bonds. “That Summer” features four reels of 16mm footage shot at their dilapidated manse three years before “Grey Gardens”; Big and Little Edie again seem delighted and horrified by the attention, and indulge in their trademark blend of Beckett-esque banter and therapy-room revelations (like an uncomfortable intimation about incest). The footage, intended for a documentary about the Hamptons by their cousin, Lee Radziwill (Jackie Kennedy Onassis’s sister), and celebrity photographer Peter Beard, was eventually confiscated by Radziwill (no doubt over its unflattering portrait of family), but director Goran Olsson (“The Black Power Mixtape 1967-1975”) has revived them in their entirety, with supplemental material from Beard’s collection (including home movies shot by Andy Warhol and Jonas Mekas) and recollections by Radziwill (with Sofia Coppola). The end result is not so much a commentary on or companion piece to “Gardens,” but a different perspective on what is now well-known material; Beard and Radziwill offer what feels, at times, like a more nuanced glimpse of the Beales that focuses on the manic friction and awareness of an elusive that drove mother and daughter crazy, but also bound them together. 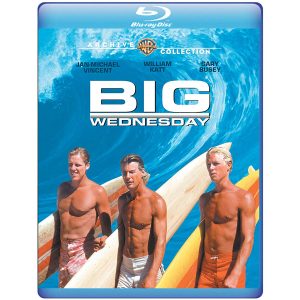 “Big Wednesday” (1978, Warner Archives Collection) Surfing is Life, and vice versa, in this ponderous if occasionally poignant coming-of-age drama from John Milius (“Red Dawn). Jan-Michael Vincent, William Katt and Gary Busey are ’60s-era Southern California hotdoggers who find definition and escape from real world problems in the waves at Surfrider and Ventura (nice location footage), until the real world catches up with them. If the mythologizing and dialogue feel onerous at times, Milius also manages to sum up the teenage synthesis of aimlessness and ambition, as well as the quasi-mystical qualities of surfing; the photography by Bruce Surtees is frequently beautiful, and the cast, which includes Patti D’Arbanville, Barbara Hale (Katt’s real-life mom), surf legend Gerry Lopez (as himself) and Robert Englund (who narrates), is honest. Warner Archives’ Blu-ray includes commentary by Milius and a making-of doc. 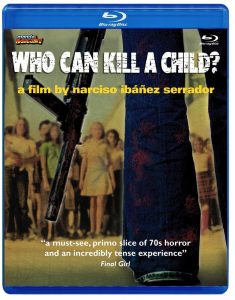 “Who Can Kill a Child?” (1975, Mondo Macabro) For British tourists Lewis Fiander and Prunella Ransome, the island of Almanzora is the perfect summer holiday destination: quiet, sun-kissed and far from the Spanish mainland. And it proves to be just that, except for two details: all the adults appear to be missing, and the island’s children seem very excited – even eager – to have them in their midst. What happened to the grown-ups – and what becomes of Fiander and Ransome – is unpleasant (though largely telegraphed by the title), but even more disturbing is that there seems to be no concrete reason for it, though writer-director Narcisco Ibanez Serrador suggests a history of misery visited upon children was fuel enough for the response. You don’t have to buy into that to appreciate Serrador’s cool, methodical creep towards the film’s terrible truth and even more unsettling denouement. As with all of Mondo Macabro’s releases, the Blu-ray is flush with extras, including an interview with Serrador, alternate opening and audio tracks (English and Spanish), a video essay by Kim Newman and an abundance of promotional material. 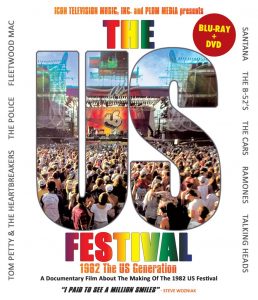 “The US Festival: 1982 The Us Generation” (2018, MVD Entertainment Group) Not a concert film, but rather a documentary about the first iteration of the iconic ’80s music festival, which took place at Glen Helen Regional Park in San Bernardino on Labor Day weekend in 1982. The majority of the acts – which included the Ramones, Talking Heads, Tom Petty & the Heartbreakers, Fleetwood Mac, Grateful Dead and Gang of Four – are only glimpsed briefly, and some (the Kinks) are not seen at all. Several groups do get one complete song, including stellar takes on “I Can’t Stand Losing You” and “Strobelight” by the Police and B-52’s, respectively, but the majority of the running time is devoted to festival organizer and Apple co-founder Steve Wozniak‘s attempts to keep the shows afloat while avoiding the wrath of co-organizer Bill Graham and behind-the-scenes footage (construction of the massive stage and accompanying highway off-ramp); Stewart Copeland, Kate Pierson and Mick Fleetwood also weigh in on their US Fest experiences, while doc director Glenn Aveni provides sporadic, if informative commentary.

Paul Gaita lives in Sherman Oaks, California with his lovely wife and daughter. He has written for The Los Angeles Times, LA Weekly, Variety and The Fix, among many other publications, and was a home video reviewer for Amazon.com from 1998 to 2014. He has interviewed countless entertainment figures from both the A and Z lists, but his favorites remain Elmore Leonard, Ray Bradbury and George Newall, who created both Schoolhouse Rock and the Hai Karate aftershave commercials. He once shared a Thanksgiving dinner with celebrity astrologer Joyce Jillson, and regrettably, still owes the late character actor Charles Napier a dollar.
View all posts by Paul Gaita →
This entry was posted in Movies, Music and tagged IFC, Lionsgate, Mondo Macabro, MVD, Warner Archives Collection. Bookmark the permalink.