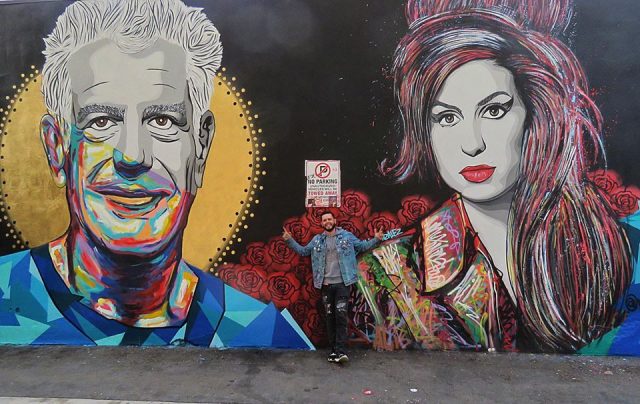 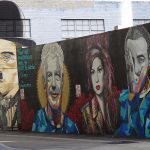 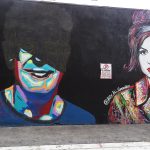 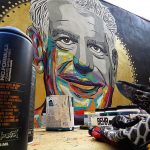 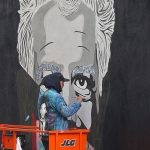 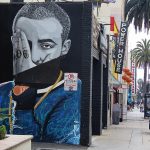 Alex “Ali” Gonzalez is a photographer, illustrator and muralist who hails from Granada Hills in the San Fernando Valley. His first mural, John F. Kennedy, was created as a gift to his alma mater, John F. Kennedy High School. Since then he has been prolifically painting the walls of Los Angeles with cultural icons who have inspired him, from Frida Kahlo to Prince to Tupac.

His newest mural is a tryptich of Anthony Bourdain, Amy Winehouse, and Mac Miller located in an alleyway next to the Welltopia on Highland, across from the Hollywood/Highland Center. It is a tribute to inspirational artists gone too soon. Chef, author and world traveler Anthony Bourdain took his own life in a hotel room in France last June, singer Amy Winehouse died of alcohol poisoning in the summer of 2011 and Rapper Mac Miller overdosed in September of last year.

Although it is unclear whether the overdoses were intentional, one could say that drug and alcohol abuse is a form of slow suicide. I feel certain that all three of these tragic figures suffered from depression. Perhaps if there is a message it is in the quote Artist Alex “Ali” Gonzalez posted on his Instagram picture of the mural image of Mac Miller:

Born and raised in the great city of Los Angeles, this food, culture and music-loving punk rock angeleno wants to turn you on to all that is funky, delicious and weird in the city. While Elise holds down the fort, her adventurous alter ego Kiki Maraschino is known to roam the country in search of catfish.
View all posts by Elise Thompson →
This entry was posted in Art, Books, Food, Music, Photo Essays. Bookmark the permalink.