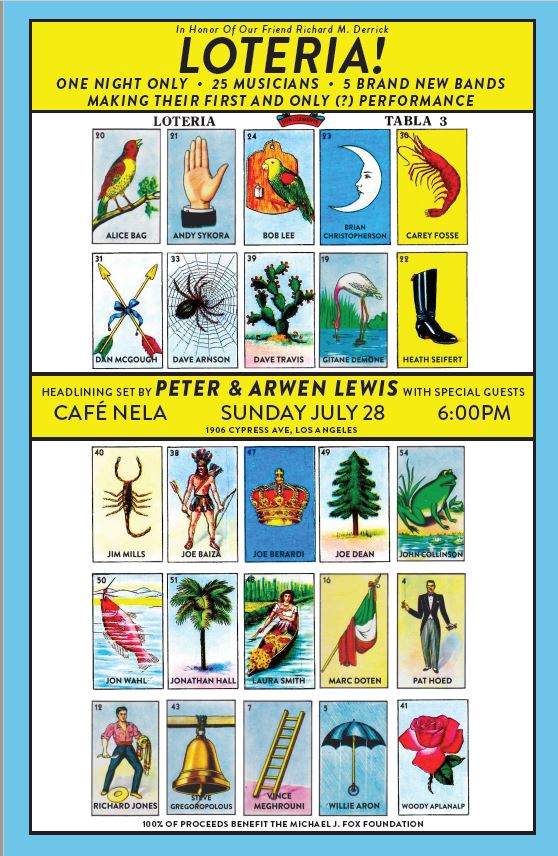 More than thirty local musicians will be performing at Cafe NELA on Sunday, July 28, 2019 in LOTERIA!, a unique evening in which a dream lineup of players has been assembled, but the deck that dictates who plays with whom has been shuffled. Seven bands will be taking the stage for the first time; some of the members having played together previously, some just having met. It’s an attempt by the friends of Richard Derrick–a beloved musician and organizer of musical happenings from San Pedro, who passed away in May of this year–to give his restless creative spirit its proper tribute.

Although he was a highly skilled guitarist, bassist and drummer who performed regularly, for most of the years that I knew him, Richard did not have a steady band. His group Another Umbrella was doing its last handful of shows when we met in the early 90s. His preference, beginning around 1995 and now operating under the name Solo Career, was to round up one-of-a-kind lineups that could play a show with no future goals in mind. He realized that this is possible to do if you can find really good players, who don’t require much if any rehearsal.

Some of the sets were entirely improvised, without so much as a pre-show discussion of methods and tactics between the musicians. (I know this because I was often one of them.) Other sets were peppered with cover tunes, with Captain Beefheart, Soft Machine, MX-80 Sound, Bloodwyn Pig and Eric Dolphy compositions among the repertoire.

Visiting luminaries from the UK’s Canterbury Scene like Kevin Ayers of Soft Machine, and Richard Sinclair of Hatfield and the North were able to arrive on a plane in LA and find a competent, well rehearsed band of sympathetic musicians waiting for them, along with a pleasant place to stay, that Richard had inevitably researched and made happen, sometimes at great expense to himself. For someone I saw as a great organizer and facilitator, he was completely uninterested in money. But if there was any, he wanted to make sure everyone else got paid before he did.

How he routinely got players of a fairly high caliber–guitar virtuosi like Nels Cline, Ken Rosser, desert rock legend Mario Lalli, Woody Aplanalp, who went from CalArts’ MA program to Bobby Womack’s band, and Saccharine Trust’s Joe Baiza were all regular collaborators–had a lot to do with Richard’s own good will and cooperative nature. He had a keen sense for knowing who would want to play with who, and would sometimes put a band together around a meeting of two people, each of whom would immediately agree upon hearing the other was involved. As a result, his shows developed a good reputation, and he became generally known as someone who could facilitate swift collaborations, with a quality result.

That is the spirit in which the participants in LOTERIA! agreed to be assigned at random into newly formed bands, and to come up with something to play at this show on July 28.

The closest thing to a band people have seen before will be the final set, from Moby Grape founder Peter Lewis, his daughter Arwen Lewis, and their band the Yellin’ Bells. But, in the spirit of the event, they too will have a unique lineup, with appearances from singer Emily Hay,  vocalist and violinist Petra Haden, and guitarist/multi-instrumentalist Willie Aron, a session player with a large resume, last seen playing keyboards with the Dream Syndicate.

Gitane Demone, leader of the Gitane Demone Quartet and former member of Christian Death, is in a band with me, along with Woody A., Marc Doten (Double Naught Spy Car), Rich Jones (Ssssss) and Danny McGough (Tom Waits, Social Distortion). Our combo has written two original songs for the evening. One is hypnotic and spooky, the other is  kind of poppy. It’s been a fun experience watching a big group come together quickly around a common goal, and makes me really anxious to see what everyone else has come up with.

Alice Bag is in the mix, which is a great pleasure, considering that her inspiring tale of having led a group of young girls in a summer camp to write their own punk anthem is one of the things I thought about when conceiving this event. She’s got Willie Aron, Joe Dean from the Wrinkling Bros, Ghidorah principal Carey Fosse, and ubiquitous drummer-about-town Joe Berardi, whose resume includes Alice Bag albums, in her band.

We’ll see Steve Gregoropoulos from WACO and Jon Wahl of Claw Hammer and the Amadans combine forces with the Black Widows’ Pat Hoed; Baiza and Dave Arnson with battling guitars, or will they declare peace instead; powerhouse rhythm players like Andy Sykora, Brian Christopherson, and John Collinson. NELA owner and event facilitator Dave Travis will be on stage with his cello. Paul Lacques (I See Hawks In LA, Double Naught Spy Car) and Kevin Keller (Pat Todd & The Rankoutsiders) have voluntarily and deliberately joined two of the bands created at random, a flagrant violation of the rules, which is nonetheless declared to be in bounds.

All the proceeds from the $10 cover will benefit Parkinson’s cure research through the Michael J. Fox Foundation, which was Richard’s chosen charity at the last couple of events he put together.

It’s night that won’t happen again, and even though I’m playing a small part in it, I can’t help but recommend it here. More people should have known about Richard when he was here to do his thing for us. We, his friends, and friends of friends, are going to have to do it for him this one time.

Disclaimer: Bob Lee in involved in this project. 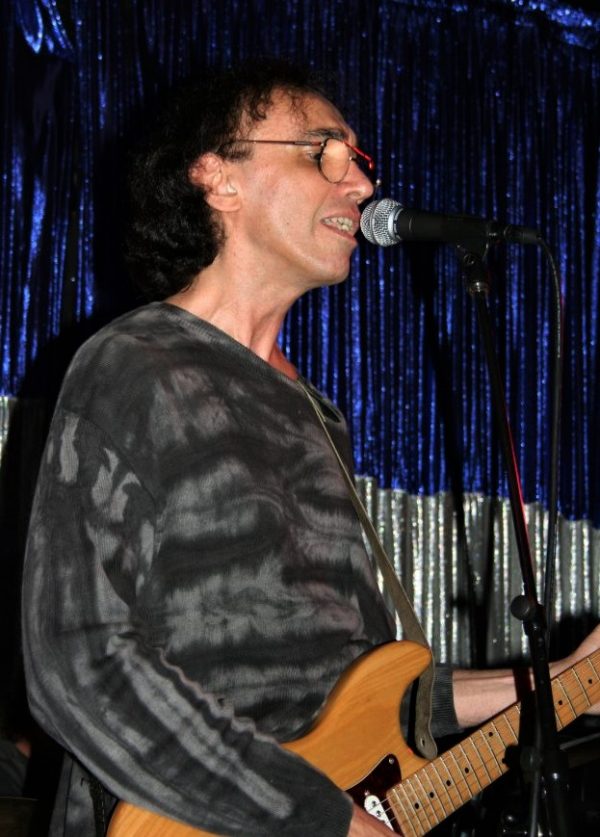 2 Responses to In LOTERIA!, Veteran LA Musicians Play A Game Of Chance To Honor Richard Derrick