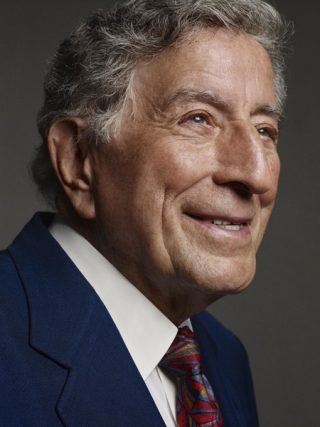 Last night I had the rare pleasure of sitting through what felt like the shortest concert in history, but in reality went far into the night.  It felt much shorter than it was, primarily because that’s what a great concert feels like–over almost as quickly as it started.  I could have been sitting in a bar hearing a five-piece quintet play softly, with precision. I don’t mean that there was an alternative to what I saw and I could have been at it instead, I mean it felt like I was sitting in a bar, a cool jazz bar.

Some concerts take you back, back to a time when you got up and crossed the room to change the dial on your hi-fi, going all the way down to the left side, where all the cool cats who sang jazz songs, American classic songs.  The man who took us back to that place last night was none other than the venerable singer Tony Bennett.

I have to admit, before attending the show, I thought the venue would be much emptier than I found it, and the show would be attended mostly by the same crowd that goes to those oldies concerts.  Surprisingly, and thankfully, the show was nothing like that. As far as you could see, way up into the hills, there were fans, and they were digging the music with respect and reverence. Fans of all ages sat and listened, with intent. No crowds of people holding up their phones, just crystal clear music, reverent silence, and huge applause after each set.

Mr. Bennett has pared down his arrangements, performing with a bass, piano, drums, and guitar. Gone was the usual stage clutter of monitors, instruments, teleprompters, and the myriad other things that usually clutter a stage. That’s where the respect for what he did comes in. With such a huge stage, bereft of the aformentioned clutter, there was nowhere to hide.  No horns, no orchestra, no backup singers. To think that a man of his age (92) can go out on a stage, with the smallest possible quintet is staggering. People who talk about The Rolling Stones and decry their age should have been present last night. Bennett’s vocals are not diminished, and neither is his enthusiasm.

Having a wide-open stage was a great way to do it, the effect that this had on the show was wonderful. This is the way all music presented at The Bowl should sound, crystal clear, amplified not only by the speakers, but by the shape of the bowl itself.  This kind of show is exactly what The Hollywood Bowl was meant for.  Bennett literally held the audience in the palm of his hand, giving dramatic pause in the middle of songs, remarking, “Wake Up!” during a few pauses. You could have literally heard a pin drop whenever he paused a song, but that’s not to say that the audience was totally quiet.  After each song, his audience responded heartily, giving him standing ovation after standing ovation.  You couldn’t have asked for a better setting, or weather for that matter, cool crisp air in July is a rare blessing.  The whole atmosphere was relaxed, with people picknicking in their boxes.  For those of you who haven’t been to this venue, you can’t beat it; four people to a box, folding chairs, wine and food available at the concessions (real food, not a helmet filled with nachos).  This is how all concerts should be. My only complaint is that it seemed to breeze by in a few minutes, which is a testament to the quality of Bennett’s performance. Cool and breezy.

As for the setlist, all I’ll say is that he played all the songs…too many to list, many melodies giving pause to full renditions of I Left My Heart in San Francisco, Fly Me To The Moon, some Gershwyn numbers, and even some modern pieces reworked.  The intimacy of the whole thing really did feel as though I were sitting at a bar in the coolest place, with a five-piece band playing just for me.  Every song felt like an encore, with the audience on their feet. Well done Mr. Bennett, I hope you keep going forever!

Ivor Levene likes to interview musicians, write about music and musicians, play music, listen to music, read about music, photograph musicians, and anything else you can think of with music. He has been involved with the music scene for over thirty years and his posts have appeared all over the place! Ivor says "I'm going to write about music as long as I have something to say".
View all posts by Ivor Levene →
This entry was posted in Events, Music. Bookmark the permalink.