The First Krampus Run Held at Alpine Village was a Swatting Good Time for Both the Naughty and the Nice. 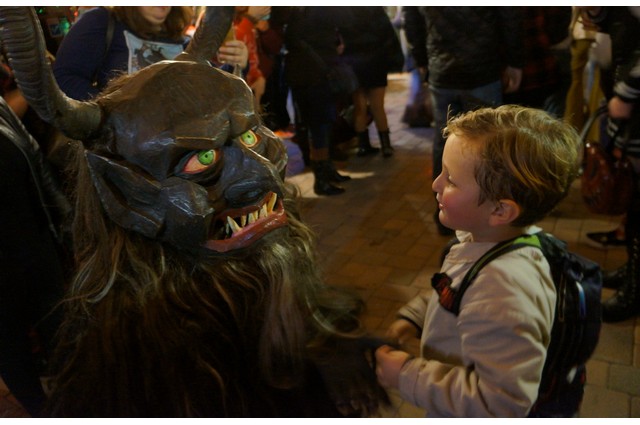 Krampus Run at Alpine Village 2019. All photos by Elise Thompson for The LA Beat.

Last Saturday at 5 o’clock the doors to one of the chalets at Alpine Village began disgorging Krampus of all shapes and sizes–horned, furry, blue, black, and white, with glowing eyes, protruding tongues and pointy teeth. And they were not alone. Saint Nicholas was on hand to benevolently counter the Krampus’ punishments. The Saint Nicholas was excellent this year, inquiring in a voice you would expect from Santa as to how good everyone had been, and referring to some of them as “naughties.” One Krampus was huge, like a Syd and Marty Kroft creature, and there was even a black goat–Black Phillip perhaps?

In certain Alpine Villages, the Krampus is Saint Nicholas’ menacing companion who punishes the naughty children. Every year there is a traditional Krampuslauf, or “Krampus Run,” where villagers dress in animal pelts, carved masks and horns, and playfully chase the children around dispensing swats with a switch made from twigs. Krampus L.A. brought this tradition to Los Angeles in 2013, and the fun has not stopped since. The local Krampus Run has traditionally been held in conjunction with the DTLA Art Walk, but this year it is joining the Krampus Ball at Alpine Village in Torrance.

I was really excited about the Mari Lwyd joining in. Coming from Welsh Christmas traditions, it is like a giant hobby horse with a beautifully decorated horse skull and a person hidden by a shroud, who becomes the horse’s “body.” O.C. Mari Lwynd, who was animating the creature, was clearly a dancer and had a lot of energy and stamina, spinning and jumping, making it a lot of fun to watch. She was accompanied by Tottendanse Dance Macabre, musicians and dancers in skull masks with a kind of New Orleans voodoo vibe. There were also women in babushkas and old fashioned peasant dresses whose faces were covered with moss. They were handing out candy canes to the children. They may be related to Frau Perchta, another German dark companion who lives in the woods, or a pagan tradition I’m not familiar with. But they were beautiful.

The crowd, dressed in German costumes or goth holiday wear, even some sporting horns of their own, parted to allow the Krampus through. For the next hour, Krampus swatted at people with switches, rattled chains, rang bells, pounded drums and posed for selfies with the gathered throng. Some of the impressively fearless children wanted to talk to the Krampus, or touch them. Or even hug them, and the Alpine monsters good naturedly bent down to their level and were gentle with the kids, often giving them high fives.

The crowd was so dense around the little chapel in the center of Alpine Village that the Krampus couldn’t really chase people, or even get in a full-force swat on anyone either, except for those who bent over and willingly offered their posteriors, giggling saucily all the while. I saw one good chase, and I suspect that those two knew each other. I only caught one good whack, right at the end, when a departing Krampus caught me in the back of the knee and I nearly crumpled. I don’t think he meant to hit me in such a tender place.

At one point in the evening I was highly focused on taking pictures and someone else was right over my shoulder, which is normal for a crowd full of photographers. When I put down my camera, I glanced to my side and a huge Krampus face was resting on my shoulder! I screamed and then laughed hysterically.

At 6 o’clock, the lucky ones with tickets lined up for entry into the Krampus Ball where Rosemary’s Billygoat was playing. Next year I will have to plan ahead. Once again, the Krampus Run was a fun and well-organized event, thanks to Al Ridenour and Krampus L.A. Keep an eye on The LA Beat and we will alert you when tickets go on sale for the ball next year. Hopefully, Alpine Village, which is threatened with demolition and currently under consideration to be designated a County Landmark, will still be here. 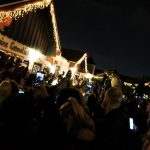 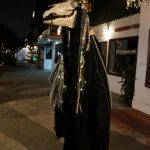 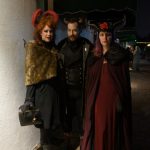 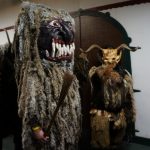 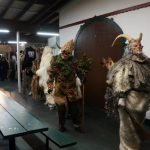 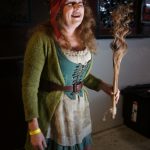 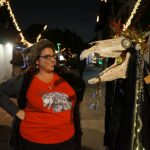 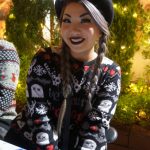 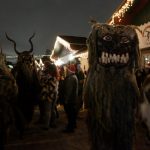 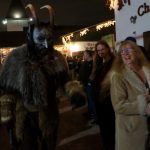 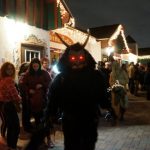 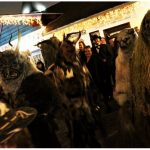 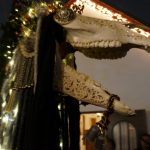 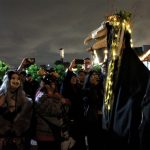 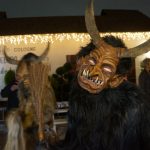 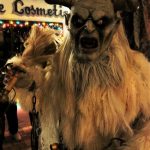 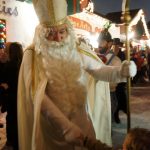 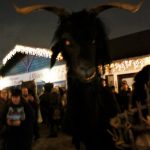 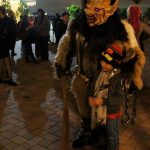 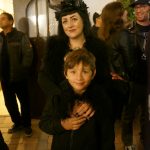 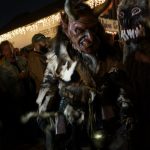 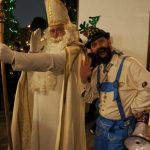 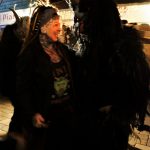 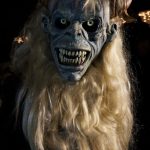 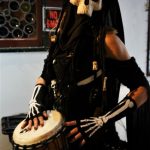 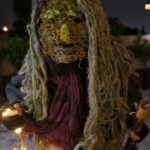 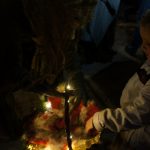 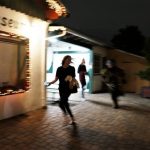 Read our interview with Al Ridenour

Born and raised in the great city of Los Angeles, this food, culture and music-loving punk rock angeleno wants to turn you on to all that is funky, delicious and weird in the city. While Elise holds down the fort, her adventurous alter ego Kiki Maraschino is known to roam the country in search of catfish.
View all posts by Elise Thompson →
This entry was posted in Attractions, Events, Fashion, Photo Essays and tagged Alpine Village, Black Phillip, holiday traditions in Los Angeles, krampus, Krampus L.A. Al Ridenour, Krampus Run, Krampuslauf, Mari Lwyd, Saint Christopher, The Krampus Ball, Tottendanse dance macabre. Bookmark the permalink.