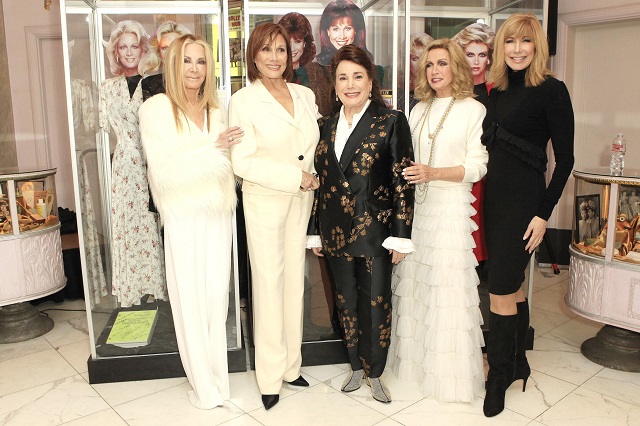 On the second weekend of January 2020, it was difficult to distinguish the second decade of the 21st century from the third-to-last decade of that of the 19th (i.e. the latter half of the 1970s) as Joan Van Ark, Michele Lee, and Donna Mills (aka the ladies of Knots Landing) descended upon the lobby of the Hollywood Museum.

Pending the nth in a series of Lobby unveilings (and the first of 2020) the Ladies of Knots Landing alighted the red carpet; continuing on in to the marble floor of the Hollywood Museum costumed all white, reminiscent of certain televised angels of yore, giving those possessed by Charlie a run for their money! 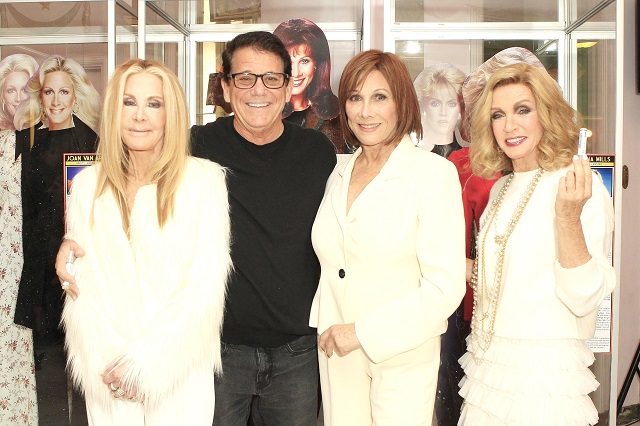 Having aired on CBS (not all together un-swiftly on the heels of that other angelic/goddess trio series, albeit sporting a slightly longer run) from December 27, 1979, to May 13, 1993, upon hearing the lore behind Knots Landing one might surmise the runaway nighttime soap was just *this close* to having never been made. The concept, initially rejected by CBS, but a precursor to that of Dallas, inspired creators David Jacobs and Michael Filerman to rework it by way of incorporating characters spawned by its televised progenitor but conceptualized successor! — And lo, the spinoff series to Dallas was born!!!

Set in a fictional seaside town adjacent to Los Angeles pending the 14 year run of the chronologically enduring soap, the opportunity for all manner of dramatic subject matter was ripe for exploration, up to and including that of: rape, murder, kidnapping, assassination, drug smuggling, corporate intrigue, and criminal investigation – All too much drama for denizens of the real world but, pertaining to the four married couples residing on the ostensibly serene cul de sac of Seaview Circle – it was a thriving tapestry of entertainment awaiting to be woven for invisible big brothers and sisters spying through analog TV screens the world over rendering Knots Landing one of the longest running evening soaps in the land! 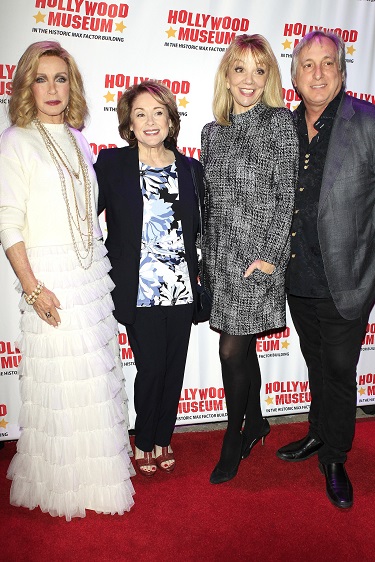 Though not the strongest initial contender in the weekly ratings, Knots Landing would eventually gain ground by upping the ante on all manner of suspenseful scenarios, along with the incorporation of new stand out characters as the season progressed. It would eventually surpass Dallas by its 1988-89 season to much critical acclaim!

Though the original series concluded in 1993, it would not be the end of said legendary storytelling jag pertaining to the all-too-suspenseful lives of Karen, Valene, and Abby. 1997 bestowed fans, and newcomers alike, a look in on the trio’s pre-millennial existence by way of a two-part mini-series entitled Knots Landing: Back to the Cul de Sac. Post millennial haze, the televised veil was lifted once again for a reality show of sorts by way of a cast driven retrospective entitled Knots Landing Reunion: Together Again. Knots Landing originated its trailblazing mark on Hollywood by being one of the first nighttime dramas to center around story lines featuring women as the pivotal focus rather than men.

To this day Van Ark, Lee, and Mills posses fond memories, future forward prognostications, and copious amounts of sentiment not only for their experiences on the show, but the fans themselves. According to Michelle Lee, “Everyone has been speculating on what would Karen (her character on Knots) be doing now.  Some think she would be political and campaigning to become America’s first woman President. I believe she would be running a brothel!”

Joan Van Ark displayed her love of the show, its cast, and all…umpteen of her televised ex husbands by proclaiming her pride at having been re-married the highest number of times during the course of the series. Her real and true loves however, pertaining to the 14 year run, were revealed to be none other than Lee and Mills as evidenced by a heart encircled photo of herself amidst the terrific trio she unveiled for public consumption on the night in question: “This photo has always been on display in my house. It represents the close bond we had then and now, and we are ‘Knot’ done yet!”

Donna Mills had nothing but love for the fans themselves (a possible point of contention she and Van Ark may want to work out at some point themselves) even though most of them all disliked her character intensely (another point of contention her character may want to broach with her character’s therapist pertaining to imaginary strangers who don’t like the alter to her alter-ego…?– wait – what?!?): “A day does not go by that someone doesn’t share their favorite memory or scene from the series … or to tell me how awful they thought Abby was.” 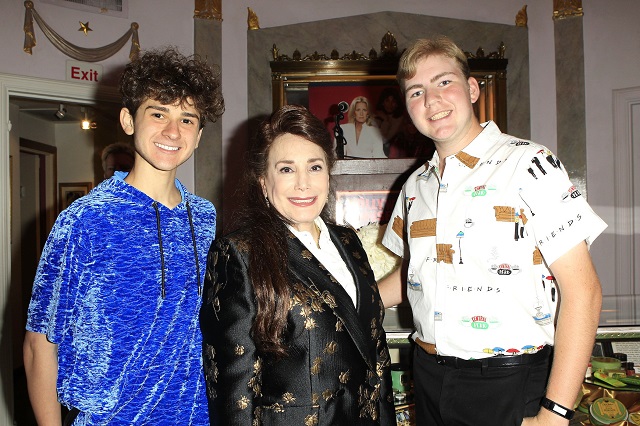 Hollywood Museum and Founder Donelle Dadigan’s sentiments were most relatable at the admission of her ardent, and near obsession with the series (but nothing worthy of therapy) relating to festive retreat and repose as she and her friends “… would, like so many across the country, gather every Thursday night for Knots Viewing Parties. This lobby exhibit is a personal source of fond memories with friends … all wearing our shoulder pads.”

Melrose Mondays and Bachelor Pad Bashes, eat your hearts out — and all hail the mighty shoulder pad instead!!!

Other celebrities and colleagues in attendance: Donna Pescow i.e. Annette of Saturday Night Fever fame, Anson Williams aka Postie from Happy Days, Leeza Gibbons of Entertainment Tonight, no doubt one of the very first interviewers of the trio, Carolyn Hennesy of Cougar Town and General Hospital Fame, Johnny Whitaker, aka Jody on the 1960s sitcom Family Affair, Meredith Thomas actress writer and producer born in 1892, (according to the Internet) but looking no older than 35, American playwright Billy Van Zandt, comedienne and actress Teresa Ganzel, Diana Lansleen of The Young and the Restless and Days of Our Lives, Kate Linder of The Young and the Restless, Todd Sherry of Parks and Recreation, actress and comedienne Elaine Ballace, Erin Murphy aka Tabitha of Bewitched fame, Ilene Graff mom of Gen Xer Wesley T. Owens on Mr. Belvere, Alice Amter also fellow Gen Xer Raj Koothrapali’s mom on The Big Bang Theory, and representing the non-Discofied  patently youthful generation (the nickname for the generation for the Millennials and post-Millennials) Connor Dean of Cool Cat, and Jax Malcolm of Crazy Ex-Girlfriend fame,  to name a few… But only a few…

Knots Landing costumes are on display now for a limited time, at the Hollywood Museum!

Jennifer K. Hugus was born at a very young age. At an even earlier age, she just knew she would one day write for the LA Beat! Having grown up in Massachusetts, France, and Denmark, she is a noted fan of Asian Cuisine. She studied ballet at the Royal Danish Ballet Theatre and acting at U.S.C. in their prestigious BFA drama program. She also makes her own jewelry out of paints and canvas when she isn’t working on writing absurdist plays and comparatively mainstream screenplays. Jennifer would like to be a KID when she grows up!
View all posts by Jennifer K. Hugus →
This entry was posted in Miscellanious. Bookmark the permalink.