“A Woman’s Guide To Low Self-Esteem”: You TOO May Have Scalp Odor 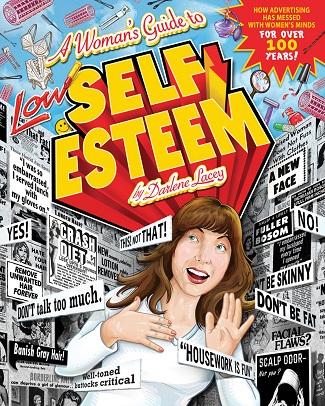 “Imagine if as much thought and strategy were applied to world peace as they have been to vanquishing the eternal scourge, unsightly fat.”

“A Woman’s Guide to Low Self-Esteem” is a funny and sometimes surprising look at the onslaught of advertisements directed at women throughout history. Written by Darlene Lacey (a former L.A. Beat contributor), with illustrations by Joe Lacey, the book’s collection of ads is sorted by each body part that supposedly needs fixing, and there is so much more than what you might think. I was expecting mostly ads about weight loss, hair removal and bust size, but apparently no part belonging to a female has ever been safe from harsh criticism followed by false promises. I was bewildered to see that even our knees have been targeted heavily. God forbid you have “kninkles” (knee wrinkles), ladies!

Lacey emphasizes the fact that these ads contradict each other in ways that make it impossible to comply, even faster than the constantly changing standards of beauty. If you have a flat butt, you need to pad it, but if you have a big butt, you should hide it. “Don’t be skinny! Don’t be fat!” Even if you consider yourself immune to the ridiculous claims of advertisements, this kind of no-win assault seeps into the subconscious and makes you reluctantly scrutinize every feature you’ve got.

As Lacey says, “What is it about a single hair where it shouldn’t be that sends us running to the bathroom, when we also spend hours making all the rest of our hair as eye-catching as possible?”

One thing that’s especially interesting (or infuriating) is the tone of the older ads. There is no subtlety here; the companies behind these products openly shamed women for having “fat ugly ankles” or even a whiff of body odor. Not to mention this mean-spirited line from Pamprin about menstrual bloating: “Of course, if you still look puffy after taking Pamprin, maybe it is fat, baby.” Imagine the backlash that would cause today!

It’s also weird to see that, as more and more women entered the workforce, the ad copy would claim that they now had “double duty”—assuming they were also still homemakers—and needed beautiful hands to impress the boss despite doing the dishes at home. They also had to watch out for their hips widening from sitting at desks—something called the “secretary spread.”

So all the business men sitting at their desks must’ve been worried about having wide butts then, right? Right?? No, of course not.

While it might occasionally make you cringe, this book is both a fun read and a good flip-through coffee table piece. I laughed out loud a few times, like at the cartoon bat asking, “Do I look okay in this tank top?” in the section on flabby arms. “A Woman’s Guide to Low Self-Esteem” is available now from Diner Mighty Graphics!

Simone Snaith writes young adult and fantasy novels, and sings in the band Turning Violet. A fan of scifi, fantasy, the supernatural and most things from the '80s, she enjoys reviewing music, books and movies. You can read about her own books at simonesnaith.com.
View all posts by Simone Snaith →
This entry was posted in Books, Health and Beauty, Miscellanious and tagged advertising, Darlene Lacey, diner mighty graphics, Early advertisements, humor, sexism, Vintage, Women. Bookmark the permalink.