Every Picture Tells A Story, Don’t It? 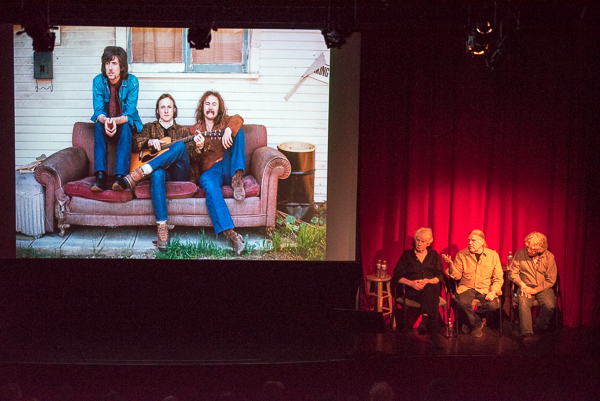 All photos by Ivor Levene

Last night I had the pleasure of attending the Bernstein, Diltz and Nash show, Behind The Lens at Largo at The Coronet, another one of our city’s treasures, tucked away out-of-sight on La Cienega just north of The Beverly Center, a theater so intimate and filled with character it could be my living room.  Last night it held three key characters from the first act of the music scene, Henry Diltz, Joel Bernstein, and Graham Nash.  The show was part history lesson, part museum, and part fireside chat.  You got to hear the stories behind some of the most iconic photos in rock history.  The stories that these three spun while seated in reverse order onstage were just as intimate an account as one could ever hope for.  At one point, the distance between the sound booth way up top and the stage disappeared and I felt as though I was sitting in my living room listening to these amazing stories.

Graham Nash recounted being driven around by Cass Elliot in her Porsche and being introduced to David Crosby (who quite predictably in the story was holding a big box of weed and was “rolling the most perfect joints you have ever seen”).  Mr. Diltz, who is one of the most acclaimed photographers ever, recounted how he ended up in the business by virtue of a chance meeting with Crosby, Stills, and Nash, courtesy of Cass Elliot who had been pining for John Lennon.  Nash revealed that in the famous cover of CSN’s first album as shot by Mr. Diltz, he has been accused of making the international sign for “vagina” (go back and look at the cover).  Henry Diltz could not be reached for comment.

Some other great nuggets of information I picked up last night?  Graham Nash always “tries to look like James Dean” when being photographed.  That would explain the occasional stern look I got when shooting his photo, and when Joel Bernstein shoots a subject they always seem to look pissed off at something, yet when Henry Diltz shoots the same subject, they smile.  Honestly, there were so many intimate accounts of just about everyone in the annals of rock music, it would be too many to list here.  Of course when you take into account that Henry Diltz has shot somewhere in the neighborhood of 400,000 photos, you know you’re in for an evening filled with great stories.  When you add in Joel Bernstein and Graham Nash….You’ll simply have to follow the show and catch it yourself, I don’t want to give too much away here.  If you’re a fan of the music scene, you really have to see this (or one of the many other shows put on by The Morrison Hotel Gallery).

Also on hand last night was the always lovely and charming Pattie Boyd, celebrated photographer and ex-wife of George Harrison and Eric Clapton.  You can read my interview with her and Henry Diltz here: Pattie Boyd and Henry Diltz Interview.  Too bad Clapton didn’t decide to drop in last night, but hey, it was getting packed by show time.  The event was produced and curated by Mr. Peter Blachley of the Morrison Hotel Gallery, which I am firmly convinced is at the nexus of rock history, no matter which coast you live on. it’s simply a must-see collection of images and the stories behind them.

Story and photos: Ivor Levene for The Los Angeles Beat 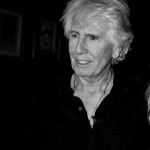 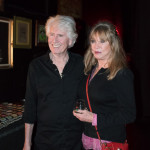 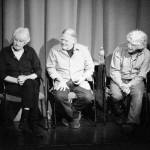 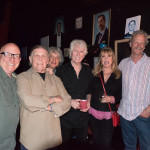 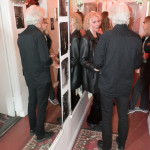 The two faces of Graham Nash 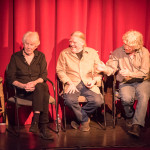 Ivor Levene likes to interview musicians, write about music and musicians, play music, listen to music, read about music, photograph musicians, and anything else you can think of with music. He has been involved with the music scene for over thirty years and his posts have appeared all over the place! Ivor says "I'm going to write about music as long as I have something to say".
View all posts by Ivor Levene →
This entry was posted in Art, Events, Music, News & Sports and tagged #behindTheLens, #grahamnash, #henrydiltz, #joelbernstein, #morrisonhotelgallery. Bookmark the permalink.