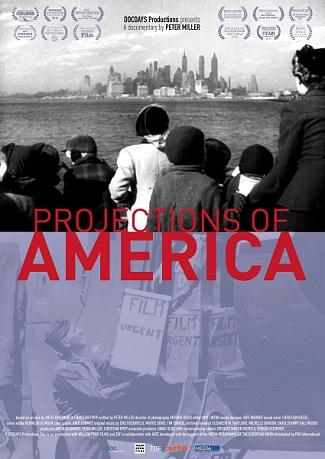 As with the best films about filmmaking and filmmakers the pleasures of “Projections of America”, Peter Miller’s wonderful addition to what is becoming one of the preeminent bodies of work in current documentary cinema, are multi-layered. And as the narrative of this profoundly moving film unfolds it is difficult to sort out whether the wonderment is more from the story itself, the beauty with which it is told or the drama and suffering of the world war within which it takes place. Each facet plays a part. Each part is compelling enough to carry a film outright. And, taken together, producer/director Miller and his collaborators, director of photography Antonio Rossi and editor Amy Linton have offered up a tender glimpse into the creation of a little known yet passionate collection of short films from one of the great names in American cinema. An undertaking that still speaks to us about what we could be, some 70 years on. 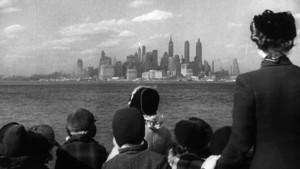 “Projections of America” is the story of Academy Award winning (‘It Happened One
Night’) screenwriter Robert Riskin’s work on behalf of the Office of War Information during World War II. The OWI was charged with producing a series of documentary films (26 were completed), which would be used to ‘project’ a positive image of America and Americans onto theater screens around the world. Riskin was asked to head up this project and he brought with him some of the very best talent Hollywood had produced through the 1930’s and 40’s. 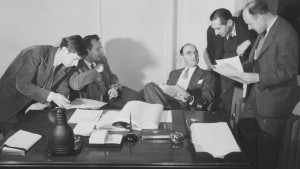 The use of film as an instrument of propaganda was perfected during the Second World War. In Germany Leni Riefenstahl and in the Soviet Union Roman Lazarevich Karmen and Alexander Dovzhenko were not only creating powerful films that captured and memorialized forever a world unraveling, they were also inventing an art form and setting a standard for documentary journalism that remains to this day.

While Riskin may not have had the behind the camera credentials of Riefenstahl, Karmen or Dovzhenko, he understood the craft of screenwriting as well as anyone who ever scrolled a blank piece of paper into a Royal or a Remington. The films Riskin wrote (or collaborated on) include ‘Lost Horizon’, ‘Lady For a Day’, ‘You Can’t Take It With You’, ‘It Happened One Night’, ‘Platinum Blonde’, ‘Mr. Deeds’ and ‘Meet John Doe’. The films that made Frank Capra famous for their humanity and social consciousness – most of them were written by Robert Riskin. Capra’s wonderfully realized and widely acclaimed films began as Riskin’s written visions. In addition to bringing this collection of WWII documentary films into our consciousness “Projections of America” also serves to bring Riskin’s name into the conversation whenever these widely acknowledged Capra films are discussed.

Embracing the opportunity presented him by the OWI, Riskin assembled a team of notable filmmakers – writers, directors, cinematographers and editors – and set out to find stories about cowboys and window washers and immigrants that could tell the rest of the world who the American people were. The spirit that energized the humanity of his scripts for Capra was given full reign in these visually rich glimpses of character.

Riskin used the talent and resources available to him to not only inform the other nations of the world about the dreams to which America aspired, he took the opportunity to create a cinematic invitation for America itself to embrace the vision he and his colleagues felt was calling it forward. In this cleverest of twists Riskin used the platform, really the screens, given him around the world to reflect back to our own country the humanity, the industriousness and even the courage that were fundamental to the American experiment. It was as if he was creating characters and myth within which the country could recognize its own potential and into which it could grow. 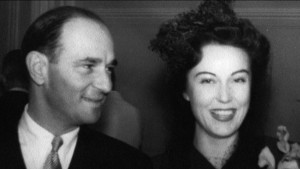 The film also includes an excellent sub-text about the deep and loving relationship
between Riskin and his wife Fay Wray (“King Kong”) and their family.

“Projections of America” is the fifth film from Miller, Rossi and Linton ( the others being: “AKA Doc Pomus”, “The Internationale” which was on the Oscar shortlist, “Sacco and Vanzetti” and “Jews and Baseball”) where they demonstrate a remarkable ability to move back and forth between historical (mostly black and white) footage and newly shot color digital so beautifully and effortlessly that when the film is over I fully expect the world itself to modulate between color and shades of grey.

The original music composed by Eike Hosenfeld, Moritz Denis and Tim Stanzel was an excellent accompaniment to the visual imagery throughout the film and the undertone of melancholy that wrapped itself around the unexpected end of Riskin’s career. The tastefulness of melody, instrumentation and the musical themes created as good a melding of sound with story as one could hope for.

In addition to “Projections of America”, this event will include a screening of Robert Riskin’s “Autobiography of a Jeep” (1943), one of the 26 short films produced for the Office of War Information. An exceptional opportunity to see not only the story about how these films came to be made, but also to see one of them – most of which have not been shown in nearly 70 years.

If you love film, if you love documentary film and – more particularly – if you love documentary film that explores what it means to live life as a passionate, creative and engaged human being, then venturing out to see “Projections of America” (with its Los Angeles premiere as part of the International Film Festival North Hollywood Saturday April 30 at 4:00 PM at the NoHo Arts Center) will provide one of the warmest and life affirming experiences of the year.

Director Peter Miller, Editor Amy Linton, noted Los Angeles Times film critic Kenneth Turan (who also appears in the film and adds a tremendous amount of historical and cinematic insight) and special guest Emmy-Award winner and former WGA President Victoria Riskin, daughter of Robert Riskin & Fay Wray will be on hand for the screening and a Q&A that will follow.