Reviewed: The Who’s Tommy – Live at The Royal Albert Hall 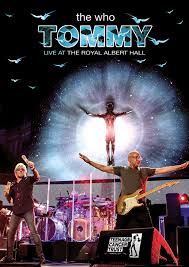 As a concert film, this is a completely immersive Who experience, but because of the material (except after the full performance of Tommy) it can be somewhat confusing, depending on when you first discovered Tommy. If you’re of a certain age, i.e. old enough to have studied Tommy when it was only an album, then this DVD will fit with your memories.  The band plays the entire album, song for song, in the exact order it was recorded in, and spares nothing.  If you’re a bit younger (like me) and Ken Russel’s Tommy was the vehicle that really brought Tommy alive for you, you might find something missing, namely the visual cues that make the story more vivid.  Of course, this is kind of contradictory because when I see a live show, I could care less about what’s on the screens.  If you’re a real “lyrics” kind of person, you won’t find anything missing.  Hey, that’s just how my brain works.  You may be (hopefully) more developed than I am.  The bonus material does include some full-screen visualizations of “Acid Queen” and “Pinball Wizard”.

Similar to The Rolling Stones’ Sticky Fingers Live at The Fonda Theater, recently released by Eagle Rock, this DVD captures The Who performing the entire Tommy album, something never before attempted by the band, and I’m sure something that they won’t ever repeat.  This was done over two nights last April, and according to Pete, “the first night wasn’t as good”. The show was a special event benefitting The Teenage Cancer Trust, a charity close to Roger Daltrey’s heart.  So what you get here is The Who performing every song from one of their most popular albums,  along with a mini-concert thrown in at the conclusion of the Tommy portion.  I can only imagine what it must have been like to have attended this concert, inside the venerable Royal Albert Hall, the home of some of the best shows to ever take place, a venue known as much for it’s sound as for the visuals.  If you’re a fan of The Who, you will want to grab this DVD, which is scheduled for release in just a few days time.  I saw the band in 2016 do many of the songs on this DVD, and I actually think the DVD sounds better than they did live, mainly because I think the bass sounds better on the DVD than it did live (don’t kill me if you’re a fan of Pino Palladino).  I thought the 2016 live show was missing something:  Bottom end.  This has John Button on bass, and Zak Starkey provides the thunder and the rhythm section is missing nothing at all.

How’s that for your money’s worth?  Worth every penny!

Ivor Levene likes to interview musicians, write about music and musicians, play music, listen to music, read about music, photograph musicians, and anything else you can think of with music. He has been involved with the music scene for over thirty years and his posts have appeared all over the place! Ivor says "I'm going to write about music as long as I have something to say".
View all posts by Ivor Levene →
This entry was posted in Miscellanious. Bookmark the permalink.