Manhattan Transfer Songstress and Founder Erin Dickins has us-S-up for Her Singing: Upstairs at Vitello’s to Commemorate New Album!

Imagine if you will a halcyon Sunday afternoon in early November. Then take that late fall journey down memory lane, swinging a sudden detour across a street of the same name, hopping progressively on over to International Alley; Sprinkle it with more than a touch of musical mirth and maudlin undertones and you’ve got former Manhattan Transfer Songstress Erin Dickins’ Sunday Afternoon Jazz Brunch!  In a fit of most decided musical fervor, Dickins cops any and all Manhattan-style intrigue, evincing a slight diversion down a cobblestoned French alleyway, amidst a lulling turn down Jobim Circle all within the cozy confines above L.A.’s most famous–and infamous–dinning establishment alike: Vitello’s; all this on the heels, and in celebration, of her most recent solo album release: Erin Dickins Vignettes.

Dickins an award-winning jazz vocalist and founding member of The Manhattan Transfer does not disappoint.  Having performed with musical luminaries such as James Taylor, Leonard Cohen, Gregg Allman, The Talking Heads, Roberta Flack, Yoko Ono and James Brown she holds her own–on her own–via her soothing, yet attention-getting vocal skills and casual matter-of fact wit. A skilled chef, one of Dickins’ signature styles involves “adding a little sizzle to her swing” by performing at “Gourmet Concerts” wherein music is celebrated just as readily as savory snacks are served! 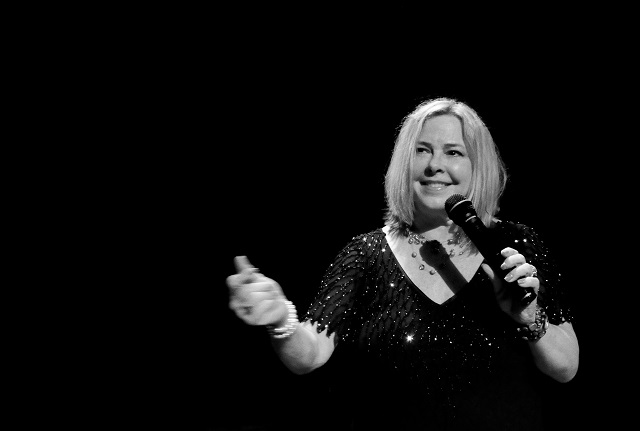 Comprising hits sung by the Mrs.—Erin that is–(yes, the happily married Dickins’ husband Tony calls her right at the start of her set—Ostensibly to assure her phone is off before going onstage, but not before hanging up after fait accompli and before uttering a word: a most humorously ironic slice of life display) both the stage show and album alike thrill to beautiful and lulling effect, exhibiting most noted domestic and globally exotic of flavors. Highlighted selections include: Wonderful World (Sam Cooke), Black Trombone (Serge Gainsbourg), O Grande Amor (Antonio Carlos Jobim), I’ll be Your Baby Tonight (a most uncharacteristic Bob Dylanesque song by none other than the man himself), Erin Girl For Rhythm Sid (by Nat King Cole and Lester Young, sounding much like a one woman Manhattan Transfer re-enactment in real time when Dickins gets done with it), and Which Way Steinway by A.J. Croce “I knew A.J. when he was in diapers so it’s funny to see things all come full circle.”

But by far one of the most moving pieces would have to be Came so far for Beauty by Leonard Cohen “We lost Leonard Cohen, so sad. Years ago, I had the great pleasure of working with him… He died before we mixed [this version]. 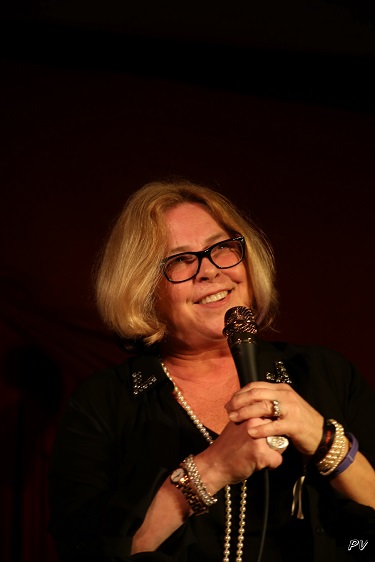 “[When I set out to make] a new CD Vignettes I wanted to do each track with one [legendary] musician,” Dickins enthusiastically intones.  So collaborate and collaborate she did via a dream cast of fellow melody makers, artists and conductors.  David Friedman can be heard quite distinctly via his vibes on the classic Jobim melody O Grande Amor. Steely Dan Guitarist Elliott Randall was happy to lend a hand, both hands, and all fingers on the Wonderful World track.  Leonoard Cohen Producer John Lissauer is heavily featured on Came so far for Beauty. Renowned pianist Rob Mounsy can be heard tickling the ivories on the effervescently French Bicyclette and A.J. Croce (son of Jim) puts the ol’-time Croce spell (both bottled and completely uncorked) on Which Way Steinway.

Though the music itself derives from all over the map, the first and second half of said program are distinctly mapped in kind. “We’re going to come back with a more raunchy set,” declares Dickins after..well, the first set. “So, if you’re going to have a cocktail, now would be a good time,” she blithely admonishes.

Then again, she needn’t feel too badly. For,  we all know anybody who is anybody who would begin a nap at 2 pm (i.e. an ambient toddler who might have randomly strolled in) will be long asleep so as to never be exposed to the Serge Gainsborgs or the Francis Albert Lais of the program. Or ironically yet coincidentally enough, (ironcidentally?) someone alive on this planet long enough to have forgotten being born will most likely care even less pertaining to any activity revolving around creating anything remotely potentiating a birth.

“Black Trombone was written in the 70s by Serge Gainsbourg; his lyrics were filthy,” admits Dickins boldly yet modestly. Oho!  But nothing holds a candle to an admitted song sung at her wedding for her very own husband reenacted a capella:

Whoever said a good man was hard to find, Positively, absolutely sure was blind; I found the best that ever was, Here’s just some of the things he does: He shakes my ashes, greases my griddle, Churns my butter, strokes my fiddle; My man is such a handy man!

In the audience on said sunny, blustery afternoon: Little House on the Prairie’s Alison Arngrim (aka Nellie Oleson), The Young and the Restless’ Kate Linder to which a good natured Dickins exclaims from the stage, “35 years, that’s so amazing. Nobody keeps a gig that long,” to ‘it’s funny because it’s true’ fits of laughter from the house and last but not least Gilligan’s Island’s very own Mary Ann and varying and sundry other Hollywood luminaries, either musically, or managerially to which Dickins in all her good humor and affection refers as “the rest”.

All in all, a lulling yet upbeat afternoon of song, humor, nostalgia, and actualization!

Jennifer K. Hugus was born at a very young age. At an even earlier age, she just knew she would one day write for the LA Beat! Having grown up in Massachusetts, France, and Denmark, she is a noted fan of Asian Cuisine. She studied ballet at the Royal Danish Ballet Theatre and acting at U.S.C. in their prestigious BFA drama program. She also makes her own jewelry out of paints and canvas when she isn’t working on writing absurdist plays and comparatively mainstream screenplays. Jennifer would like to be a KID when she grows up!
View all posts by Jennifer K. Hugus →
This entry was posted in Miscellanious and tagged American Songbook, Erin Dickins, Harmony, Jobim, Manhattan Transfer, swing, vitellos. Bookmark the permalink.