“Stu and the Kids” Brings Thai Flavored Fest to Vibiana

Jazz and the Jitlada family serve up Kanom Jeen Namya, (Thai Southern Curry Noodles with Fishballs) at Stu and the Kids. All photos by Elise Thompson for The LA Beat.Once again “Stu and the Kids,” now dubbed the “Flavors of Asia Food Fest” will be bringing its Thai-inspired food festival to the gorgeous Vibiana event space downtown. Sunday, August 4, 2019 from 3 PM until 7:30 PM guests will be dazzled by beautiful Thai dancers, Muay Thai boxers, live music, auctions, and a feast of Thai-inspired dishes from some of the best chefs in LA. The fundraiser benefits Stuart Skversky’s school in Chiang Mai, Thailand and provides scholarships for the students to get a University education.

“In 2009, Stuart Skversky, a Los Angeles rising star chef, moved to Chiang Mai to become a full-time volunteer at the Wat Don Chan (the local Buddhist temple), teaching local children English, cooking, and baking. Recognizing a need to help prepare these high-risk Hill Tribe kids following their graduation, he founded Stu and the Kids to better prepare them for adulthood,” according to the event release.

Every year Chef Skeversky invites his chef friends to participate in raising funds to help the kids throughout the following year. Every year Neal Fraser not only offers Vibiana as the event site, he also prepares something delicious from his on-site restaurant, Redbird. Just a few of the other participating chefs and restaurants are favorites Walter Manzke and Republique, Jitlada, Mei Lin and Nightshade, The Ensaymada Project, Gilberto Cetina from Chichen Itza and Holbox, Savore Catering, Same Same Thai, Ayara Thai cuisine, Chao Krung, and Food Network celebrity chef Jet Tila.

Refreshments will be provided by Bodega Wine Bar, Singha and Leo Beer, Winebow Fine Wine+Spirits. Herb + Orchard’s water infusions, and of course, famous fresh coconut bar so you can drink coconut milk straight from the coconut!

General admission is only $135 dollars with $25 for kids (6 and under are free). VIP tickets are $225 and include early entrance (2:30pm) to the event as well as receiving a Stu and The Kids tote bag including swag like a signed copy of Jet Tila’s new cookbook “101 Epic Dishes.” 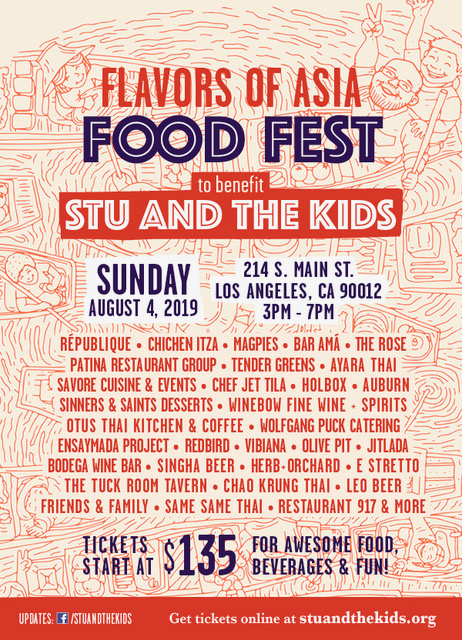