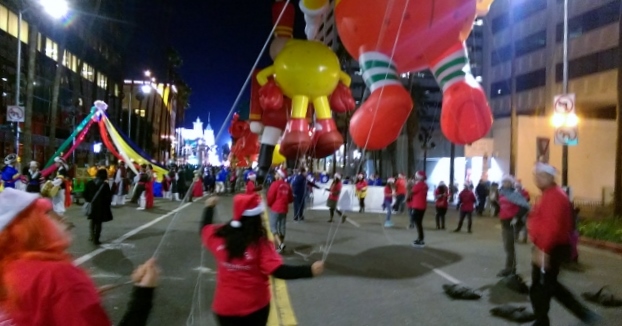 Filled with celebrities, balloons and dozens of marching bands, the Hollywood Christmas Parade is one of the biggest Christmas parades in America.  2016 marked the 85th observation of this Southern California holiday tradition.

The Hollywood Hotel is among the many groups that partner with the parade to wrangle the balloons as the parade proceeds through the streets of Hollywood.  This year, they extended a special offer to their guests to join the parade team as a balloon wrangler.

I was invited to join the Hollywood Hotel balloon team to get a behind-the-scenes look at the parade.  Here’s a recollection of that experience!

An efficient check-in gets me up to the room quickly.  The bed looks totally comfy and plush.  I ponder a nap and wish I could stay longer but I need to get to the parade HQ to meet up with the hotel’s balloon team. 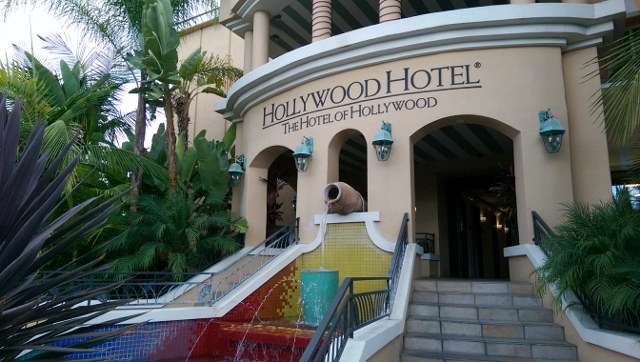 Arriving at the Hotel. 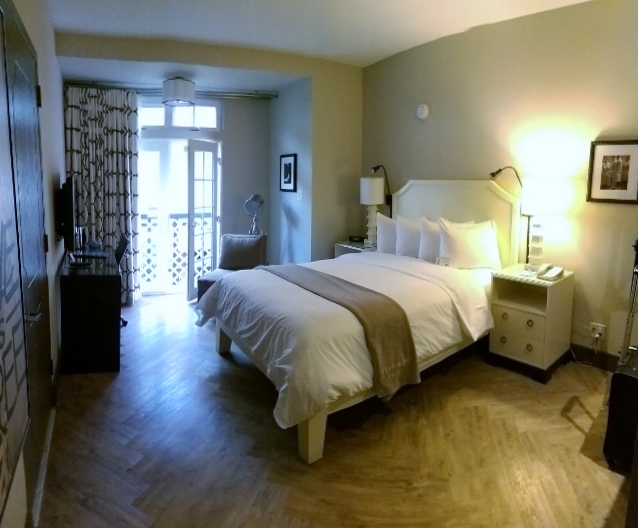 With street closures, traffic and insane parking, getting to Hollywood on parade day has all the makings of a migraine headache.  Fortunately, the hotel is just a block or so away from the Vermont/Santa Monica Metro station.  A brisk walk and a short ride lands me right in middle of the parade area near Hollywood and Highland.  Just $1.75 fare each way!

Go Metro!  Riding the train makes the trip to the parade route an easy one.

Arriving at the parade HQ, I find hundreds of volunteers getting their assignments as the organizers make short work of keeping up with everyone.  They make it look easy!  But I guess that’s what 85 years of operational experience gets you.  I get my marching orders and head out to join my team at our staging location. 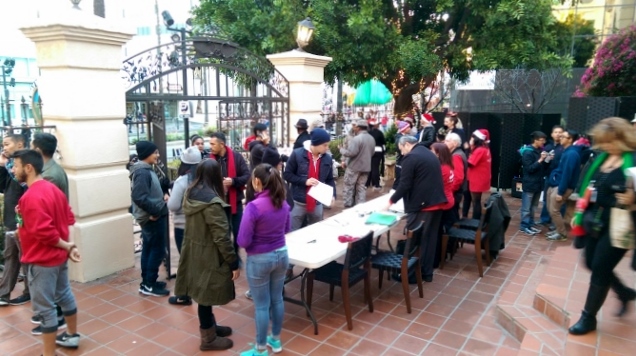 Near the corner of Hollywood Blvd and La Brea, teams of balloon wranglers are bustling around a tanker truck full of helium as they fill up one balloon after another.  Toy soldiers, cartoon characters and my team’s balloons – two spritely elves; one in green pants, the other in red – go from mats of plastic to 20-feet-tall bouncey objects full of life. 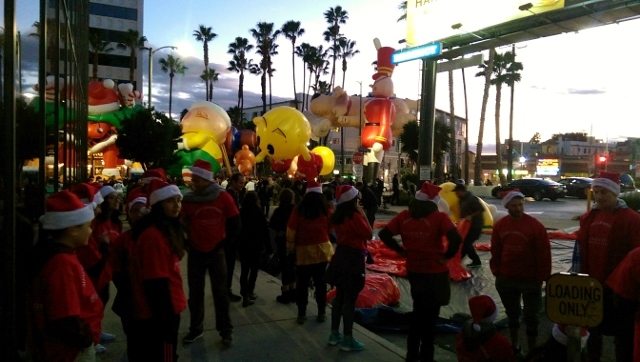 The Hollywood Hotel team standing by while the elves get a full dose of helium. 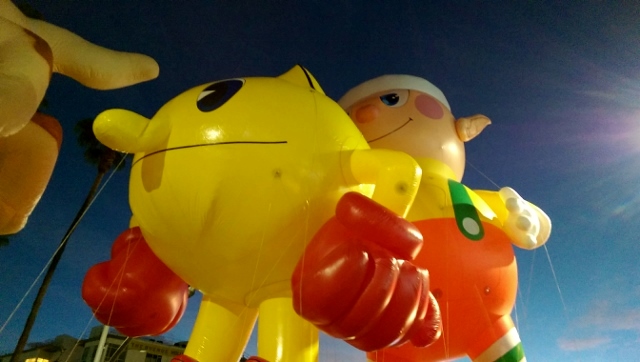 Pac Man and the Red Elf.

After getting the balloons filled and in place, there is quite a bit of time until we get underway.  The parade is already in progress, however, with marching bands, cowboys on horses, and floats all streaming onto the parade route from alleys and side streets around Hollywood Blvd.  The balloon teams make use of the time, literally learning the ropes and getting a feel for balloons as they bounce and sway with the gusts of wind cutting in between the tall buildings.  We also share a moment with band members as they march by and watch Korean dancers getting in some last minute practice before performing on the red carpet. 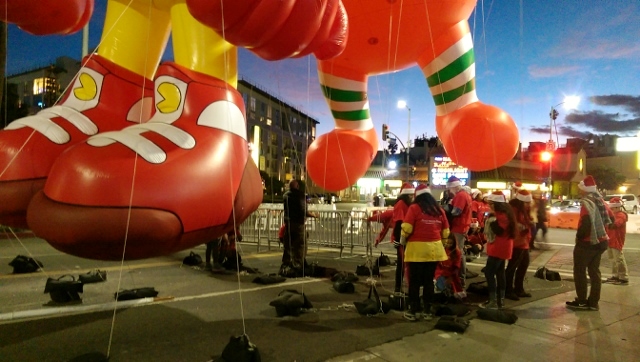 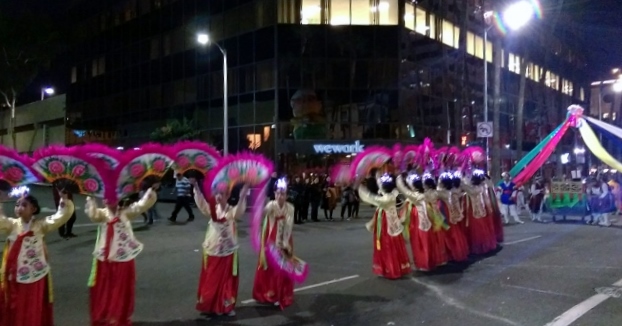 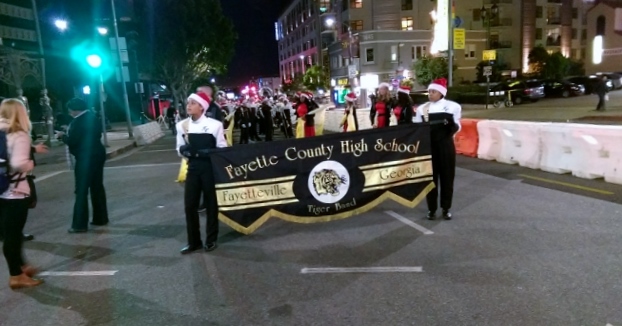 Marching bands came from all over the US, including this one from Fayetteville, GA.

Once we are underway, we are immediately on the red carpet and in the thick of the onlookers cheering, clapping, and shouting out holiday greetings.  Spirits are high and would be all along the parade route.  Just as we pass the grandstand, I manage to get a shot of the parade master of ceremonies, Eric Estrada.

The rest of the parade is like an intriguing walk down Hollywood Blvd.  We stroll down the middle of the street with our huge elf balloon in tow, waving to the crowds on the sidewalk.  It is interesting to see so many familiar landmarks from this unique perspective. 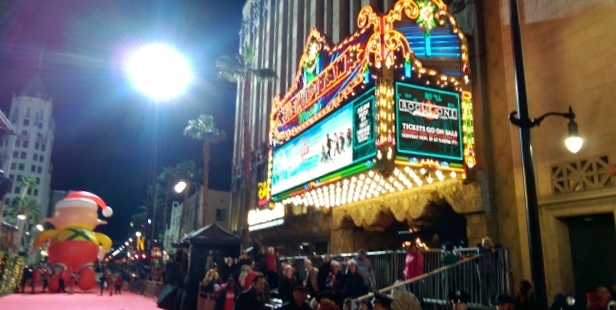 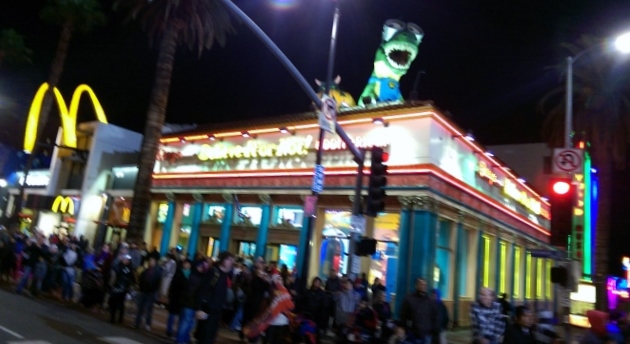 Ripley’s Believe it or Not. 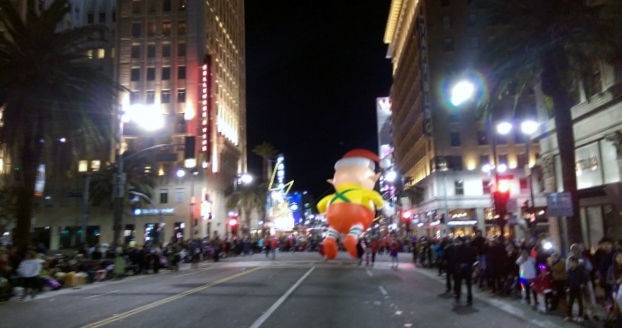 Turning from Hollywood Blvd onto Cahuenga with the Pantages Theater and the W Hotel in the distance. 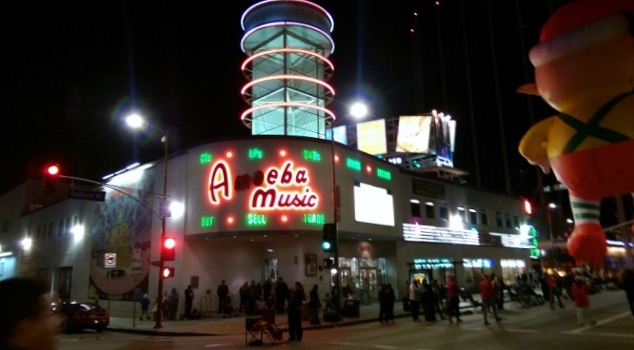 Most of the balloon wrangling is easy enough; we just have to keep the right pace and manage the balloon as it sways in the unseasonably strong wind.  The toughest parts come with dodging traffic signals hanging over the street.  We navigate around them with a little effort and lots of teamwork. The particularly annoying obstacles are the few wires that cross the parade route.  Those require the fairly tall elves to be laid out almost horizontally to get under the wire.  It’s like playing a coordinated game of limbo to get the elf down and then forward without making contact with the wires. 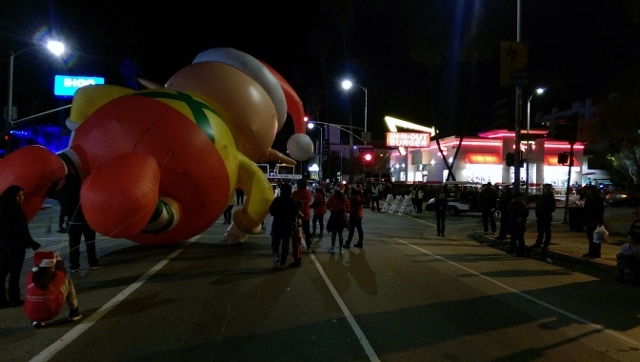 Laying the balloon out flat to dodge wires.  There’s In-N-Out! 😀

Fortunately, the parade route ends at Sunset Blvd and Orange Ave, just across the street from In-N-Out.  Jeff Zarrinnam, the director of the Hollywood Hotel and our team leader, is generous enough to treat all of the wranglers to a burger and fries to celebrate our hard work. 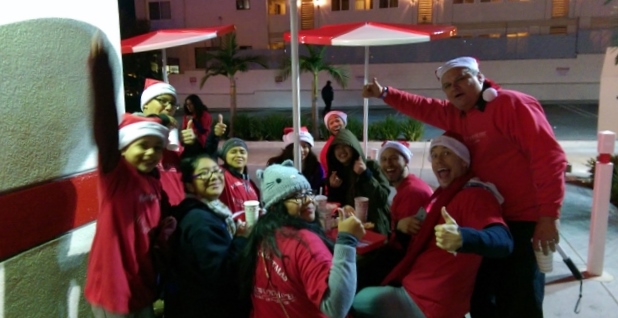 Celebrating a successful parade with the team at In-N-Out.

10 PM – Finally Time to Kick Up My Heels

I enjoy my hard-earned In-N-Out burger bid the team farewell, and head back to the metro station.  After a short train ride and brisk walk, I’m back to the hotel in what seems like no time.  After all, I’m eager to finally snuggle up in that cozy bed.

If you missed the live broadcast of the parade on November 27, you can catch the rebroadcast.  The Hollywood Christmas Parade will premiere as a two-hour primetime special on The CW, Friday, December 16 at 8 PM Pacific time.

Thanks to the staff and volunteers from the Hollywood Hotel for having me on the balloon wrangling team!